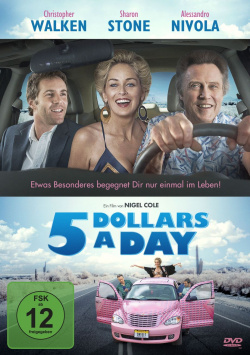 Film: Flynn (Alessandro Nivola) hasn't had any contact with his father Nat (Christopher Walken) for a long time. Instead, he tries to live a quiet, orderly life as a food inspector, in which his girlfriend (Amanda Peet) also plays an important role. But when Nat contacts his son after years of radio silence and asks him to come to him, because he would not have much longer to live, all warning signals jump to red for Flynn. For he knows Nat would do and claim anything to gain personal advantage from this. Nevertheless, he sets out to visit his father. But the brief visit soon turns into an extended road trip, during which Flynn quickly realizes why he didn't really want to have any more contact with Nat. But the more miles the two men travel together, the more they realize they have in common. But to get close again, it may already be too late.

Nigel Cole, whose films like Whisper of Grass, Calendar Girls and We Want Sex like to focus on strong women, tries his hand at a real man's story with the road movie comedy Five Dollars a Day. Yet his entertaining father-son conflict isn't really new. Much of it seems familiar and at times even reminds us of the much more dramatic film Spurensuche by Jordan Roberts, in which Christopher Walken also had a leading role. But thanks to Cole's charming staging, some very amusing ideas and especially because of the good cast, Five Dollars a Day has become a thoroughly entertaining comedy.

The way Nat cheats his way through life and scams himself out of all kinds of comforts is just too delicious. Christopher Walken plays the charming slyboots with obvious joy in the role. This makes him the perfect counterpart to the reserved Alessandro Nivola, who only really gets to thaw out towards the end. The two men are supported by Sharon Stone, among others, who, as Flynn's former babysitter Dolores, amusingly shows that Nat has left a distinct mark on more than just his son's life.

Five Dollars a Day doesn't quite have the wit one is used to from Nigel Cole. But funny and entertaining this father-son story certainly is. And if you want to know how to get free breakfast, where to sleep extremely cheaply or how to celebrate a birthday every day, then you shouldn't miss this charming comedy anyway. Worth seeing!

Image + Sound: The technical realization is on a thoroughly good level for the genre. The picture is clean, the sharpness is on a good level and the colors are mixed appealingly. The audio is rather subdued, with the front-mixed dialogue and score dominating the proceedings. However, that's all that's needed for a film like this. Therefore, the bottom line is a well-deserved: good!

Extras: In addition to the trailer and other program tips from the provider, the DVD has just under 35 minutes of promotional interviews with the director and his actors to offer. Especially the statements of Nigel Cole are very interesting despite their clear promotional character and therefore well worth watching!

Conclusion: Five Dollars a Day is an entertaining road movie that can please with a nice story and a wonderful Christopher Walken even in its weaker moments. The DVD is technically on a good level, the extras are meager, but not uninteresting. All in all, this home cinema premiere is absolutely recommendable for lovers of somewhat quieter comedies!