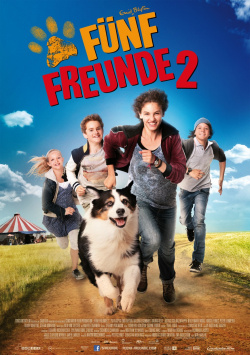 Relaxed Summer Vacation? There is no such thing for the five friends Julian (Quirin Oettl), Dick (Justus Schlingensiepen), Anne (Neele Marie Nickel), George (Valeria Eisenbart) and dog Timmy. Because what was supposed to be just a leisurely bike ride to the Katzenmoor quickly turns into a big adventure for the five. An encounter with the millionaire's son Hardy (Kristo Ferkic) has unexpected consequences when Dick is mistaken for Hardy by two gangsters (Oliver Korittke and Stefan Konarske) and kidnapped in his place. But of course, the brave kids immediately set out to free Dick from the gangsters' hands. It doesn't take long for them to track down the kidnapped man in a medieval castle. But that's when the real adventure really begins, because the head crook Rookey (Peter Lohmeyer) didn't have ransom in mind when he had the supposed Hardy kidnapped by his henchmen. The five friends get on the trail of a secret that goes back to the 19th century and that could put them in real mortal danger.

No question: if you liked the first remake of Enid Blyton's popular Five Friends stories, you'll be thoroughly entertained by this sequel. Director Mike Marzuk, who has taken a seat in the director's chair for a second time, offers young fans excitement, humor and adventure of the kid-friendly kind. Since this goes down well with the target audience and the film is also not made for adults and nostalgic fans of the old Five Friends series of the late 1970s, the film should also be judged primarily as a modern children's film. After all, as a reinterpretation of the much-loved young adult book series, it's hard for me, as someone who grew up with the old series and the audio dramas, to leave even a good hair on the new Five Friends. However, as a simple cinematic adventure for kids, things start to look a lot more positive.

However, even from this point of view, criticism can not be completely omitted. Because also Fünf Freunde 2 suffers from a problem, which appears especially in children's and youth films from Germany again and again: the representation of the adult characters. These are usually portrayed in such an exaggeratedly dorky way in order to make the children laugh at all costs with silly gags from the clothes box. And that's just annoying in the long run. Certainly, Peter Lohmeyer as a gangster-in-chief is in a certain way frightening, especially for smaller children, and a little humorous relief as a relieving counterpoint is more than appropriate and understandable. But why the whole thing has to be so exaggerated and why some fecal jokes have to be used all the time remains a mystery to me. It may be that it is the easiest way to make children laugh when adults make a fool of themselves, fart or suffer from diarrhoea. But you shouldn't underestimate children. You can also present them with more sophisticated, charming, and restrained gags that might actually be more fun for them in the long run than the same slapstick fecal joke over and over again.

Most people who grew up with the old Five Friends TV series as a kid still love the show today. The scripts weren't particularly intelligent, the child actors weren't the best actors, and the dialogue wasn't exactly award-worthy in retrospect. But the series was very exciting for children and teenagers and somehow timelessly charming staged. And that's exactly what can't be said about Five Friends 2. The film is sufficient to provide its target audience with entertaining entertainment. But this rather pale, completely interchangeable piece of work won't stay in children's heads for long. Therefore: not really a good film, but for fans of the first part absolutely worth seeing!