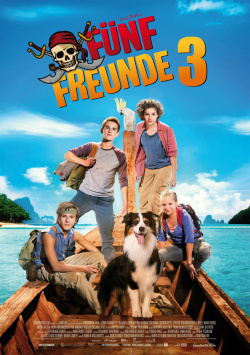 The Five Friends are Back! After Julian (Quirin Oettl), Dick (Justus Schlingensiepen), Anne (Neele Marie Nickel), George (Valeria Esenbart) and Timmy the dog have already experienced two exciting adventures, they have truly earned an idyllic beach holiday on a paradise island. But no sooner have the five arrived with Uncle Quentin (Michael Fitz) on the exotic holiday island, where Quentin is to carry out important research with an old friend, than they find themselves in the middle of the next adventure. The discovery of a mysterious compass in a shipwreck leads the friends on the trail of an old pirate treasure. Together with the local girl Joe (Davina Weber), who wants to save her village from destruction with the help of the treasure, the five friends set off on a dangerous journey through the jungle - always pursued by the unscrupulous pair of crooks Cassi (Nora von Waldstätten) and Nick (Michael Kessler), who want to prevent the children from finding the treasure first at all costs.

With the first two films, the new Five Friends have conquered a decent fan base, which should then be offered again with the third part exactly what made the two predecessors so successful. An exciting adventure, dumb crooks, a little mystery, humor and adventure. To give the whole thing the right kick, the story was moved to a more exotic location this time, where the young heroes are allowed to dive in a shipwreck, have to flee from a shark or are confronted with deadly dangers in the jungle. Of course, the whole thing never gets so exciting that the little Five Friends fans get really scared. This is already ensured by the regular humor inserts, which are a little relaxing even in the most exciting moments.

For its target audience, Five Friends 3 is thus guaranteed to become exactly the fun cinematic adventure that they have been looking forward to since the end of the second part. Criticism is therefore also more or less pointless. Still, it has to be said that it's quite a pity that this film also belongs to the endless series of German children's films that can neither do without the overly dorky villains, in this case Michael Kessler, nor the obligatory pee-poo humor, for which here a constantly relieving and stupidly chattering bird is responsible. A little humor isn't bad. But the fact that it always has to be so silly doesn't exactly show the ingenuity of the makers. Sure, it always goes down well with little kids when the villain is covered in bird poop. But neither the books, nor the radio plays, nor the television series needed such flat gags, and yet they have had a lasting appeal to several generations of children. And I'm sure this Five Friends generation would love the adventures, too, if the crooks were a little scarier and the humor not quite so infantile.

But as long as this very simple formula works and can be successfully repeated with slight variations, I guarantee little will change in the quality of the Five Friends films. And for those who loved the first two films, all these criticisms won't matter anyway. And for these fans, the third part is also really successful, especially since it easily trumps its predecessors already purely visually. And so the bottom line is: For the target audience well worth seeing!