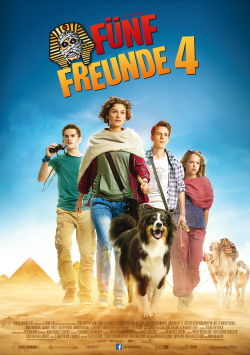 Here's to a new one: Julian (Quirin Oettl), Dick (Justus Schlingensiepen), George (Valeria Eisenbarth) and Anne (Neele Marie Nickel) have holidays again and want to spend them together with dog Timmy at Bernhard's (Samuel Finzi), the father of Julian, Dick and Anne. The preparations for a big exhibition about Egypt, which the children are supposed to help with, soon turn out to be much more exciting than they first thought. For when they catch a mysterious burglar tampering with an ancient mummy, the friends find a mysterious gold amulet that, according to legend, belonged to the first pharaoh Tutalun I. Together with Bernhard and his young colleague Elena (Lucie Heinze) the five friends travel to Cairo to find out the secret of the amulet with the help of the director of the Institute of Antiquity (Mehmet Kurtulus). But this is only the beginning of a much bigger adventure. For suddenly the amulet disappears and Bernhard is accused of theft and arrested. Only if the children succeed in recovering the amulet and unmasking the real thief can they save Bernhard - unaware of what a powerful adversary they have tangled with this time.

Following the huge success of the first three remakes of Enid Blyton's popular young adult book series Five Friends, each of which attracted over 1 million viewers to cinemas, the fourth adventure of the young amateur detectives is now coming to our cinemas. Once again Mike Marzuk, who has already directed the three predecessors, took a seat in the director's chair. And also with the main cast everything has remained the same. Since these films are produced every year and are tailored exactly to the target audience, you shouldn't expect a high quality product. In addition, the first three parts have already shown clear weaknesses in the scripts and the use of too flat humor.

But even if the story of Five Friends 4 again has to fight with several logic holes, clichés and unintentionally funny dialogues, it must be said that Mike Marzuk has directed this time a thoroughly worth seeing youth adventure. It is particularly pleasant that he has largely dispensed with overly silly acting adults. Instead, he was obviously concerned with providing his young target audience with genuine suspense against an exotic backdrop. He concentrates primarily on the adventure interspersed with fantastic elements, instead of losing himself as in the previous films in flat gags and target group chumming striving for coolness.

While this fourth part also lacks the charm of the 80s film adaptation, but is the spirit of the template much better than the first three films. If you liked those anyway, you will of course get your money's worth in the latest adventure. Because when the characters that you've taken to your heart over the course of three films are catapulted from one dicey situation to the next, that should be really exciting for young Five Friends fans. But don't worry: the tension always remains child-friendly and there's enough light-hearted humour in this film too, so that it doesn't become scary or too dark. Therefore, overall: a successful fourth part for all fans of the series. It can go on like this. Worth seeing