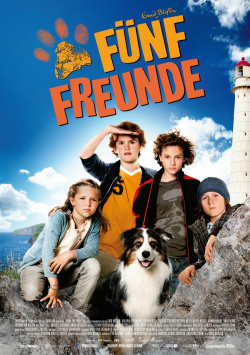 The Five Friends, created by Enid Blyton, have been an absolute cult for generations, not only because of their numerous adventures in book or radio play versions. Several TV adaptations, but especially the series from the late 70s, also enjoy a loyal fan base to this day. Now Julian, Dick, Anne, George and Timmy the dog in a first cinema adaptation from Germany are preparing to inspire a new generation of Five Friends fans.

Solitary George (Valeria Eisenbart) is not particularly thrilled when she gets a visit from her cousins Julian (Quirin Oettl) and Dick (Justus Schlingensiepen) and her cousin Anne (Neele Marie Nickel). But after some initial friction, the children pull themselves together and, together with George's dog Timmy, set off on a dangerous adventure. A find in an old smuggler's cave leads the five friends to suspect that George's father, the famous inventor Quentin (Michael Fitz), is in danger. A mysterious stranger (Anatole Taubman), two dimwitted policemen (Armin Rohde and Johann von Bülow) and two alleged animal filmmakers (Elyas M`Barek and Alwara Höfels) make it difficult for the children to investigate the case. Nevertheless, they manage to uncover a conspiracy that eclipses all their fears.

With the children who attended the press screening of Fünf Freunde, the cinema adaptation of the popular book series was very well received. Therefore, the conclusion can already be made at this point that the film is quite successful for a new generation of just smaller fans. Aimed at its target group, the adventure fun can therefore not really be criticized. From the point of view of a slightly older viewer who grew up with the books and the old series, there are, however, quite a few justified points of criticism that may well be mentioned at this point.

While George actress Valeria Eisendrat is well cast and comes relatively close to the character, it looks quite different with the other young actors. Especially Neele Marie Nickel is not really a convincing cast as Anne. Nothing against the girl, but on the one hand she's just way too young for the role and on the other hand she's not allowed to do much more than walk around with an annoyed face. And that really doesn't do this character justice. The kids all play quite charmingly and with obvious glee, but that does little to change the fact that Julian, Dick and Anne are rather interchangeable characters and no longer real characters.

In addition, it is noticeable in a negative way that the film was not made for children and teenagers, but apparently primarily for small children. Because instead of simply delivering a thrilling cinematic adventure, there has to be quite silly humor here again, for which - typical for mass-compatible children's movies - the dorky adults are responsible, of course. In this case, it's the two cops who act so over-the-top silly that really only little kids can laugh at them.

As I said, as an entertainment film for kids, the remake of Five Friends works pretty neatly. But anyone hoping that this adaptation will also have the charm of the 70s series or the excitement of the books will quickly be proven wrong. Therefore: for children between 6 and 9 years quite recommendable, adult companions will be entertained however only conditionally well.