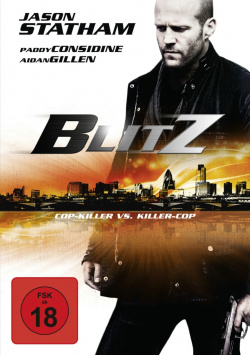 Movie: Tom Brant (Jason Statham) is a cop you better not mess with. Because he likes to flout the rules at times to enforce his idea of justice. And not only does this get criminals broken bones and bloody noses, but it also gets him into a lot of trouble with his superiors. When some brutal murders of policemen occur in London, Tom is eager to catch the culprit. To keep his temper in check, he is joined by the level-headed and over-correct Porter Nash (Paddy Considine) as his new partner. Even though Tom has a lot of problems with his new colleague because of Porter's homosexuality, the two unequal men team up to catch the killer (Aidan Gillen), who calls himself The Flash. But the cunning psychopath has only just begun his bloody game.

Blitz is based on the novel of the same name by Ken Bruen, which Elliott Lester has staged as an atmospheric cop thriller with some very accomplished moments. Jason Statham is perfectly cast in the role of the tough cop who likes to put vigilante justice above rules. However, he has to hold back in terms of action compared to movies like Crank or Transporter, which is only partly good for the film. Because Statham has already proven here and there that he can not only strike powerfully, but also play convincingly, but since his character is rather one-dimensional, his performance here also seems relatively powerless.

That Blitz still works, is partly due to the coherent gloomy atmosphere that Lester already builds in the first few minutes. But also the more than convincing performances of Paddy Considine and Aidan Gillen, known from the award-winning series The Wire, make up for many a dramaturgical weakness of the production. The extreme contrast between the character of Porter Nash and Statham's Tom Brant again makes this rather flat character a bit more interesting. And watching this duo in their hunt for the cop killer is not only entertaining, but also thoroughly suspenseful, even if the identity of the killer is not kept secret for long.

Attention: In addition to the uncut FSK 18 version, the film also appears in a good 4 minutes shortened FSK 16 version!

Picture + Sound: Since only a data-reduced press sample was available for the test, no rating can be given about the final picture and sound quality at this point.

Extras: Also the extras can not be evaluated. Announced but are just under 38 minutes of interviews, B-roll footage and trailers.

Conclusion: Blitz is a decent thriller, which is not necessarily one of the best films of Jason Statham, but at least because of the coherent atmosphere and the good supporting cast can still provide good entertainment. Who hopes for hard-hitting action, will certainly be disappointed. But if you want to see a decent cop thriller, you can definitely risk a look here. Worth seeing