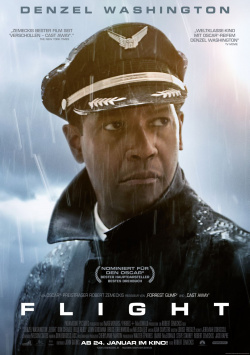 It has been over twelve years since director Robert Zemeckis delivered his last live-action film, Cast Away. For a long time, it looked like Zemeckis would only make 3D motion capture movies after the successes of The Polar Express, The Legend of Beowulf, and A Christmas Story. But thankfully, he has reconsidered. Because with Flight, he finally proves once again what a good storyteller he can be when he doesn't have to focus primarily on technical gimmicks.

The drama centers on veteran pilot Captain Whip Whitaker (Denzel Washington), who, after years of experience, can fly his passengers safely across the United States virtually in his sleep. So he has no problem getting into the cockpit only slightly refreshed after a night of sex, drugs and alcohol. But what was supposed to be a routine flight soon threatens to end in disaster when the plane runs into severe turbulence and a series of technical problems send the plane into a nosedive that Whitaker and his young co-pilot seem unable to stop. It takes a spectacular maneuver for the captain to pull off the miracle: he brings the plane down, losing only six of the 96 people on board. He is quickly celebrated as a hero by the media. After all, it's clear to everyone: no one but Whitaker could have landed the plane. But the routine investigation sheds new light on the situation and especially on the hero of the hour. And while wily lawyer Hugh Lang (Don Cheadle) fights to keep Whitaker's reputation intact and avoid jail time, Whip is forced to confront his own demons. And that doesn't sit well with the pilot.

The first half hour of Flight is really great. This is not only due to the truly spectacularly staged plane crash, but also to the excellent performance of Denzel Washington, who is able to fully develop here due to the extremely strong script. And when John Goodman makes his truly divine first brief appearance, there's no doubt that Zemeckis hasn't forgotten his craft in live-action film. The whole thing is moving, amusing and thrilling. Great cinema entertainment doesn't really get any better than this.

The problem is that Flight rarely soars to such heights after this strong beginning. There are some great moments, thanks in particular to the very good acting. Otherwise, however, the drama about guilt and atonement rather leisurely ripples towards its unfortunately overdone finale. No question, the movie is still good even in its weaker moments and the story is very engaging. Especially the relationship between Whip and the unstable Nicole (Kelly Reilly) offers the viewer some very strong scenes. But unfortunately, John Gatis' screenplay relies too often on arguably predictable clichés, which takes away much of the suspense, especially in the second half. Had Zemeckis had the guts to go the darker route at the end instead of relying on the goodness of his characters, the drama could have not only been genuinely surprising, but also had a lasting effect. As it is, however, after a first-rate beginning, the whole thing descends into too thoughtful ordinariness to leave any real impression.

In the hands of a less talented director and carried by a weaker lead actor, Flight might even have become utterly meaningless. As it is, it at least turned out to be a very entertaining drama, at least in parts, with great visuals and some great moments, which could have done with more of the occasionally pleasantly biting humour and less of the kitsch laid on too thick at the end. Despite the obvious weaknesses, the bottom line is still a more than deserved: worth seeing!