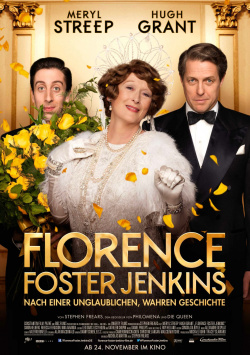 New York in the 1940s: The wealthy Florence Foster Jenkins (Meryl Streep) is one of the most dazzling personalities of the local high society and one of the most important patrons of the classical music scene. She herself dreams of performing at the legendary Carnegie Hall one day. Why not, after all, she is an extremely talented opera singer herself. At least she is convinced of that. To everyone else, however, her singing sounds awful, to say the least. Nevertheless, her manager and husband St. Clair Bayfield (Hugh Grant) does everything in his power to keep Florence's dream world going. With the help of young pianist Cosm&eacute; McMoon (Simon Helberg), she is to be prepared for her big concert, while Bayfield makes sure that, as usual, only people who are friends with Florence or benefit from her promotions will be in the audience. But then Florence decides to give away a large proportion of the tickets to war veterans, and the facade she has painstakingly built up threatens to collapse completely.

With Philomena and The Queen, director Stephen Frears has already proved that he can tell stories based on true events with plenty of humour and heart. This is also true for his latest work Florence Foster Jenkins, which seems to be tailored to the great Meryl Streep. The story, already retold in the French film Madame Marguerite and the Art of Wry Tones and more recently in a documentary about Florence Foster Jenkins, may not offer any new aspects in Frears' version. But it is a very particular style of storytelling that makes this film so wonderful and worth watching, even if you have seen the other two works as well.

It is a particular achievement that the film is not completely overshadowed by Meryl Streep's wonderful performance. There's plenty of room, especially for Hugh Grant, who's better here than he's been in a long time, and The Big Bang Theory star Simon Helberg to show off their skills and develop their characters. This is important in that the stories of each character and their relationships with each other are hugely important in making the emotional part of the film work at least as well as the humorous part. And that works extremely well, with Coms&eacute;s initial reaction to his new employer's singing in particular bringing tears of laughter to the viewer's eyes. The interplay between Streep's almost childlike enthusiasm for singing and Helberg's wonderful facial expressions makes this scene one of the funniest moments of the cinematic year.

But the fact that the comedy doesn't degenerate into a flat farce where you just laugh at Florence Foster Jenkins' lack of talent, but that the characters grow on you in such a way that you can relate to their dreams, their sorrows and their love, makes this a very, very wonderful feel-good movie. There are some very sad moments, but even those are realized in such an enchanting and life-affirming way that you don't have to be ashamed of your tears, which might well flow here. Florence Foster Jenkins is the perfect way to get a big portion of warmth into your heart and to put a happy smile on your face. So you don't mind if your ears bleed in some moments. Very clear conclusion: Absolutely worth seeing!!!