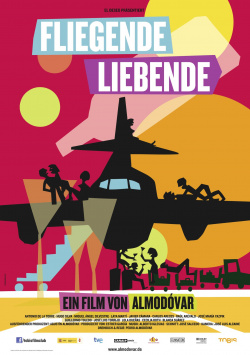 Above the clouds, the panic must be boundless. Because due to a carelessness of the ground staff, a smooth landing of flight 2549 to Mexico City is no longer possible. In order not to let an uncontrollable panic break out on board, the passengers of the wooden class were all put out of action with sleeping pills. Only the crew and the business class passengers witness the increasingly dicey situation. While the pilots desperately search for an airport where they can make an emergency landing, the chief steward and his flight attendants do their best to keep the non-narcotized passengers happy. But despite the singing and high-proof cocktails, there's no stopping tensions from rising on board. Catfights, sex, scandalous revelations - with the turbulence taking place high above the clouds, buckling up and putting your seat in an upright position won't help.

With Flying Lovers, Pedro Almodovar has directed strictly his first proper comedy since 1988's Women on the Verge of a Nervous Breakdown. His aim was not to present social or societal criticism in a humorous way. Rather, he staged an uninhibitedly silly farce in the style of classic slapstick and screwball comedies. The characters are all completely overdrawn, which is especially evident in the case of chief steward Josera and the two flight attendants Fajas and Ulloa, who act so over-the-top poncey that they almost seem like a parody of the typical cliché gays. But the rest of the characters, from a pilot with a pronounced bisexuality to a virginal psychic to the boss of a well-known escort service, aren't exactly prime examples of subtle character drawing.

But that's not what Almodovar had in mind. He wants to present his audience a colorful, shrill and weird chaos, at which it can be laughed at heartily in the best case. At the beginning this works very well. The small, very charming guest appearance of Antonio Banderas and Penelope Cruz, through which the events on board are triggered, is just as amusing as the fast-paced introduction of the individual protagonists. Especially Carlos Areces, the chainsaw clown from the great Mad Circus, as the great drama queen Fajas always provides good laughs.

It is obvious that he and the other actors had a lot of fun just fooling around in a relaxed atmosphere, without having to attach importance to great acting or meaty dramaturgy. This is also contagious to a certain degree. But with time this effect wears off very much. The whole thing seems more and more like a too long sketch, whose good ideas are repeated so often until they just aren't funny anymore. Alone the fact that Almodovar gathered many of his friends, with whom he has often worked together in the past, for this comedy in front of the camera and so a light, familiar and positively charged atmosphere was created, which is definitely transferred to the cinema audience, saves the film in the end from falling into completely annoying silliness.

So Flying Lovers is certainly not the best film by Pedro Almodovar. But it's nice that after the rather dark thriller-drama The Skin I Live In, he ventured into such light-hearted material and just wanted nothing more than to give his viewers some petty fun for once. If you're not hoping for more and appreciate comedies of the more over-the-top kind, you can safely check in on this turbulent flight. Worth seeing