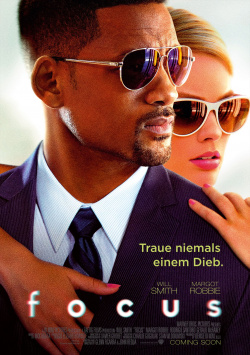 Nicky (Will Smith) is a master of deception. A master from whom junior trickster Jess (Margot Robbie) is eager to learn. Although Nicky doesn't really like to be shown his cards, he agrees to take Jess to New Orleans, where he and his team plan an extremely lucrative Mardi Gras weekend. Here Jess not only learns all kinds of tricks, but also falls more and more under the charm of the crafty crook. A passionate relationship develops between the two, which could be extremely detrimental to the business. Because the first rule for Nicky is to never be distracted and always keep the prey in focus. And so he makes a tough decision that, three years later, could screw up one of his biggest and most dangerous coups ever.

With Focus, Glenn Ficarra and John Requa (Crazy, Stupid, Love.) have directed a classic rogue comedy that, despite a contemporary production, exudes a pleasantly old-school charm. Especially in the first third, the mix of stylish look, clever humor and a dash of heated eroticism works very well and makes for an extremely high entertainment factor. Will Smith, who has made himself very scarce after his After Earth flop, is quickly at his best here, convincing with mischievous charm and casual coolness. Margot Robbie (The Wolf of Wall Street) is also well cast as the wily femme fatale and will get many a male viewer's pulse racing. However, she is not just a pretty accessory, but can also convince acting - as far as the script allows it.

Because its quality falls after the successful opening in the second half but a little. This begins with a far too long sequence in which Nicky has a betting duel with a businessman portrayed somewhat overdone by BD Wong. The resolution of the scene is ingenious, but the way to get there is a bit too tough. The same can be said for the plot thread that picks up three years after the events in New Orleans. This one has some very good moments and successful surprises to offer. But overall, it just can't keep up with the fast-paced, extremely fun beginning.

If you know a little about the genre and listen closely to Nick's explanations in the first half of the film, you won't really be surprised by the resolution. Ficarra and Requa really don't invent the wheel here. And you shouldn't take logic too seriously in some parts to have unadulterated fun with Focus. But despite some long-winded moments and a certain lack of surprises, one thing can't be denied: the film's high entertainment value. The rogue comedy doesn't want to revolutionize the genre, it just wants to offer its viewers a good mood with some pleasant show values. And since this succeeds very well, there is also a very clear: Worth seeing!