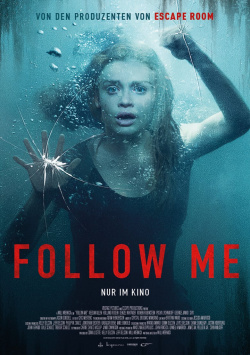 Cole (Keegan Allen) is one of the biggest social media stars who really goes all out to give his millions of followers something to watch. For the anniversary of his vlog, he wants to give fans a real spectacle. Not so easy, since he has already filmed the most extreme challenges. But then he gets an invitation to visit an Escape Room of the most drastic kind in Moscow with his girlfriend Erin (Holland Roden) and a few buddies. At first, Cole isn't convinced that an escape room is up to his standards. But after just a few minutes in the gloomy halls, it becomes clear that this hyper-realistic game really has it all. But do Cole's followers really see just a game, or a real fight for survival after all?

Following "Escape Room" (though it's not the 2019 hit movie of the same name), director will Wernick is once again drawn to the bloody, gritty world of murderous escape rooms with "Follow me". True to the motto "What you won't do for a few likes", the horror thriller can definitely be seen as a critique of the self-promotion of some (self-proclaimed) social media "stars" who like to cross moral boundaries for the sake of fame in the digital world. This is well-intentioned, but unfortunately the otherwise conventional production only marginally exploits the possibilities established by the good basic idea.

With elements from movies like "Hostel" and "SAW", which are however used in not quite such a drastic way, "Follow me" has become an entertaining, but not really original horror thriller, which is clearly aimed at the target audience that invests a lot of their free time in platforms like Tik Tok or Instagram. This is also evident in the successful visuals, which seem like a cross between a classic feature film and an Insta-story. The actors - especially the series stars Keegan Allen ("Pretty Little Liars") and Holland Roden ("Teen Wolf") - act okay, but can't really hold their own against the rather flat dialogues of the script.

Genre connoisseurs should not really be surprised by the ending. However, it is well executed all the same. So "Follow me" falls short of its potential, but overall offers enough entertainment potential for an entertaining evening at the movies. If you don't mind clichés and rather one-dimensionally drawn characters, this escape-room thriller can definitely be recommended. Worth seeing!