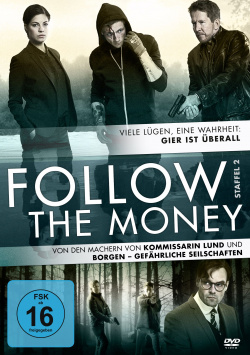 Film: Lawyer Claudia Moreno (Natalie Madueño) spent 18 months behind bars for her involvement in the illegal activities of the Evergreen energy company. Now she hopes for a new beginning - just to be able to visit her son. But Mads Justesen (Thomas Bo Larsen) and his colleague Alf (Thomas Hwan) from the economic police immediately get back to Claudia's heels, hoping to find Evergreen CEO Alexander Sødergren, who has disappeared without a trace (unlike the viewer, not knowing what happened to him). They also hope that Claudia will lead them to clues with which they can finally put a stop to Knud Christensen (Waage Sandø). The investigators are so focused that the case of a carpenter whose small business was driven to ruin by his bank does not seem really urgent to them. But then the events turn up and Mads and Alf are suddenly on the trail of a huge web of intrigues and illegal machinations, in which not only Claudia is involved, but also the two small crooks Nicky (Esben Smed Jensen) and Bimse (Lucas Hansen), who had just pulled their head out of the noose. But now she is pulling herself tighter and tighter…

"Follow the Money" enters another very exciting second round. In ten new episodes, the makers of the series once again prove how exciting white-collar crime can be. The story may sound a bit constructed at first glance. However, even though some clichés are used here, the script also always focuses on events that unfortunately happened in one way or another. Of course, this is exaggerated in the end, but it's also anchored in reality, which makes the different storylines so thrilling in the end.

You as a viewer are also so captivated because the characters appeal to you. The makers have created multi-layered figures that often balance on a moral border. There are no radiant heroes, but people who are brought into situations in which, for quite understandable reasons, they sometimes have to do things that are generally regarded as morally reprehensible. Of course, there are also the obvious "villians", but on the whole the creators of the series blur the boundaries between good and evil, right and wrong.

"Follow the Money" is cleverly constructed, atmospherically densely staged and very well played crime entertainment that proves that it doesn't take much action or bloody murders to create real tension. That's clearly what they're saying in the second round as well: Absolutely worth seeing!

Picture + Sound: As in season 1, picture and sound quality leave a very good impression for a TV series. The colouring can very well capture the different moods of the individual storylines. The picture sharpness is at an absolutely decent TV level. Even in dark scenes many details come into their own. The Dolby Digital 5.1 mix is also pleasantly atmospheric, with the voices sounding very directional but powerfully mixed. Ambient noises and smaller sound effects ensure that the surround channels also get something to do. Good!

Extras: Unfortunately, the DVD box has no bonus material to offer.

Fazit: "Follow the Money" proves again in the second season how exciting white-collar crime can be. Interesting characters, cleverly interwoven storylines turn the ten episodes into thrilling thriller entertainment at its finest. The technical implementation of season 2 is again on a good level, but there is no bonus material. Despite this shortcoming, the following applies quite clearly: Absolutely recommendable!