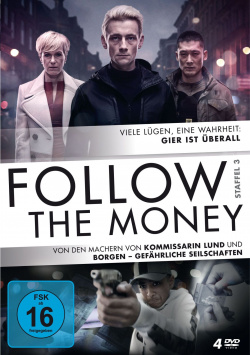 content:Since he was shot in action, Alf Rybjerg (Thomas Hwan) has suffered greatly from the psychological stress of this trauma. The former investigator of the Copenhagen Economic Criminal Investigation Department is now working for the Task Force Nørrebro. Together with his colleagues he is on the trail of an internationally operating drug ring. However, he has no idea that the investigation will bring him back together with the former petty criminal Nicky (Esben Smed Jensen), who has become a big player in the Danish underworld. While Alf and his team get closer and closer to him, Nicky plans to get out of the drug business and start a new life with his son. Bank employee Anna (Maria Rich) also plays a big role in this. Frustrated by having been passed over once again for a promotion, she secures herself a lucrative - but also dangerous - extra income as a money launderer. But the more pressure the police exerts, the greater the danger that Nicky or Anna will make a mistake - a mistake that could have dramatic consequences for everyone.

"Follow the Money" not only goes into a third round, but also into a new direction. So the whole thing is not so much a continuation of the events from season 2, but a spin-off that takes place in the same universe as the first two seasons. Investigator Alf and the criminal Nicky serve as a link between the stories. While in the first two seasons white-collar crime was the focus of the investigations, season 3 takes us on the streets and into the underworld of Denmark. Thus the whole thing doesn't look like a mere continuation, but like a completely new story with a few familiar faces. And even if there are a few small allusions to the events of the earlier episodes, this third season can be recommended to all crime fans who are just starting out here.

Season 3 also convinces again with the fact that multi-layered characters are in the center of the action. Alf for example is a good investigator, but he is totally broken and thus makes some professional, but also moral mistakes. Nicky is clearly more ruthless and violent than in the first seasons. Nevertheless, you can see that he actually has a good heart. He does some really nasty things and yet you wish him that he somehow manages to get his act together at the end and that he can start over with his little son. And Anna finally acts wrong, but somehow also understandable. She is first class in her job, but because of her age she is not promoted anymore. Suddenly a young colleague, whom she once trained, sits before her as the new boss. Moreover, her husband's company is struggling to survive. That she uses her skills to help her family and to raise her self-esteem is criminal, but somehow also understandable for the viewer.

Even if there are some small lengths and some clichés, this third and last season of "Follow the Money" is again cleverly constructed, atmospherically densely staged and very well played thriller entertainment, that can create first-class suspense even without much action. The ending leaves a special impression, which might not be what the audience wants to see, but which is absolutely consistent in its ruthless way and therefore more than satisfying. That's what the movie clearly stands for: Absolutely worth seeing!

Picture + Sound: Picture and sound quality can convince here again on a good to very good TV level. The somewhat gloomy and dreary colour scheme can capture the mood of the story very well. The picture sharpness is on a decent level and only shows some small weaknesses in the darker scenes. The Dolby Digital 2.0 mix is unspectacular, but can convince with a decent coordination of voices, ambient noise and smaller sound effects like shootings. Good!

Conclusion: "Follow the Money" ends with these ten new episodes. In the third season, a whole new story is told, which is no longer about economic crime, but drug-related crime. The only links are investigator Alf and the criminal Nicky, whose story is told thrillingly and hauntingly to the end. Technically, the DVD box can convince completely. Unfortunately, there is no bonus material for this season either. All in all a clear case of: Absolutely recommendable, even if you don't know the first two seasons!