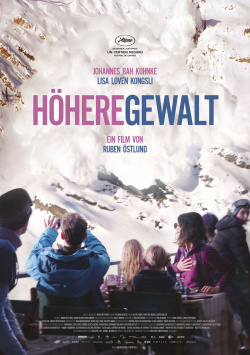 For Tomas (Johannes Bah Kuhnke), Ebba (Lisa Loven Kongsli) and their two children together, it is supposed to be a relaxing family holiday in the French Alps. A week in the idyllic ski resort to escape the worries of everyday life and just enjoy the snow, the sun and the daily freshly groomed slopes. Everything could be so beautiful. But when an avalanche breaks loose and heads straight for the restaurant where the family is having lunch, Tomas flees in panic. He leaves his wife and children behind. When the situation calms down again and it is clear that no one has been hurt, Tomas sees the whole thing as nothing more than an exciting experience to tell his friends about in the evening. Not so for Ebba: she suddenly sees her husband with completely different eyes. And so the holiday idyll suddenly turns into a tangible marital crisis, with Ebba having to fight against the shock of her husband's behaviour and Tomas struggling with his questioned masculinity.

At Cannes, Ruben Östlund's Scenes of a Marriage received frenetic acclaim. Force Majeure even won the Jury Prize in the Un Certain Regard series. At its core, this enthusiasm is entirely understandable. For the way in which Östlund here deconstructs common role models and exposes the fragility of a supposed family idyll is, in some respects, truly ingenious. The fact that biting humour creeps into what is in itself a very dramatic affair is also testament to the director's great talent. So there are some really great moments in the film where Force Majeure is able to unleash tremendous power even in very quiet images.

This, however, is not enough to carry the story for two very tough hours. As a short film, the whole thing would have been enormously effective, and it could still have worked as a 90-minute feature. But two hours is just way too long for the fact that not much actually happens. So a certain monotony spreads again and again, which threatens to degenerate into boredom after an hour at the latest. Surely, there will be some arthouse-lovers who can get involved with the very slow pacing, the long takes and also the repetitive motifs and see the real strength of the film in the unspectacular slowness. But the film will probably have a hard time reaching a broad audience, even in arthouse cinemas. For that, the whole thing is too sluggish and unwieldy to entertain more than a niche audience.

Sure, a film like Force Majeure doesn't want to be mainstream fare for the multiplexes. But it's always a great shame when inherently good stories are robbed of any entertainment value in the classic sense by an artistic pretension, and so simply can't appeal to the audience they intrinsically deserve. And therefore applies: Who appreciates biting marriage dramas and can get involved in a somewhat exhausting production, will probably have a lot of fun with this horror holiday. But if you don't like tough arthouse fare, you should give this film a wide berth. Only with restrictions worth seeing!