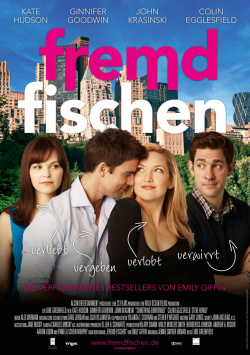 With films like the wonderful Almost Famous, the promising career of Kate Hudson, daughter of actress Goldie Hawn, began. But in recent years, Hudson's talent has been squandered on steadily flattening romantic comedies, reaching a sad low point with Foreign Fish.

Since childhood, Rachel (Ginnifer Goodwin) and Darcy (Kate Hudson) have been best friends. While Rachel is rather shy, party girl Darcy doesn't miss a beat. During her studies, Rachel meets the handsome Dex (Colin Egglesfield) and falls in love with him. But instead of taking the initiative, Rachel allows Darcy to snag Dex. Now the two are engaged and the wedding is imminent. Too bad Rachel just can't suppress her feelings. Then, after her 30th birthday party, what Rachel always wanted to avoid happens: drunk as a skunk, she ends up in bed with Dex - and unleashes an emotional chaos that could destroy more than just her longtime friendship with Darcy.

That the adaptation of Emily Giffin's novel Fremd Fischen has turned out so disappointingly isn't necessarily because of the story. It's low on surprises and follows every cliché imaginable of the typical American romantic comedy, but genre fans are hardly bothered by that. Even the fact that The Girl Next Door director Luke Greenfield's staging comes across as a bit plodding and flat is not the real reason for the failure of the bestselling film adaptation. Rather, this one is to be found with the actors.

Ginnifer Goodwin would be a good choice for the female lead in her own right. She's cute and not unlikeable, though she doesn't do much more than play a slight variation of the character she embodied in He Just Doesn't Like You. However, having been joined by Colin Egglesfield, a completely colourless Tom Cruise clone who lacks any form of romantic charisma, Goodwin also remains disappointingly pale. After only a few minutes, the viewer doesn't care at all whether the two get each other in the end or not. Even worse: since Rachel's best friend Ethan, played by John Krasinski (Away we go), the only real bright spot of the movie, is much more sympathetic than Dex and the chemistry between Goodwin and Krasinski seems to be right, you actually hope that they will become a couple in the end - which, we may reveal, is not the case. For a romantic comedy, this kind of thing just can't be good.

Kate Hudson has the most thankless role in the film. Darcy is loud, self-absorbed, and unlikable in almost every way. That Hudson plays it damn convincingly can, of course, be chalked up to great acting. But even then she doesn't leave a really positive impression. Even supporting characters like Claire (Ashley Williams, known from the first season of How I Met Your Mother), who is hopelessly in love with Ethan, are completely given away by the script's loveless and completely over-the-top characterization. Instead of hearty laughter prevails in their performances rather painful Fremdschämen, which distracts a little from the All dominating triviality, but at the same time also makes clear what potential has been trampled here.

A few successful moments and the just two really sympathetic characters in the story are simply not enough to make Stranger Fishes still a good movie. Those who like US romantic comedies will certainly be tempted to give this one a look. But even the most hardened romantics will probably only have moderate fun. If that's enough for you, you can safely go fishing for strangers. All others should fish for a better movie!