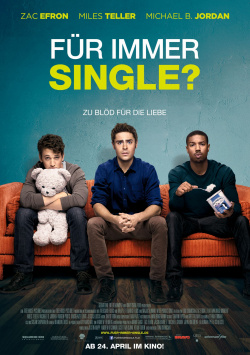 When Mikey's (Michael B. Jordon) marriage is in shambles, his best buddies Jason (Zac Efron) and Daniel (Miles Teller) are of course immediately there for him. By showing him how wonderful the single life can be, they aim to rebuild cuckolded Mikey. In doing so, they faithfully follow the motto: fun yes - relationship no! As an unbeatable trio, the friends want to enjoy the New York nightlife to the fullest. But then everything turns out differently than planned: Mikey realizes that he can no longer gain anything from meaningless affairs, Jason begins to develop feelings for the attractive Ellie (Imogen Poots) and Daniel suddenly sees in Chelsea (Mackenzie Davis) more than just a platonic friend. But the three hide these feelings from each other, putting far more at risk than just their friendship.

With his story about a male friendship in New York, Thomas Gormican made it onto the prestigious Black List in 2010, which lists the best yet unfilmed screenplays. And so it didn't take long until a studio was found that made the realization of Forever Single possible. With some hopeful young stars, to which the two future Fantastic Four members Miles Teller and Michael B. Jordan as well as the busy Imogen Poots and the former teenie-crush Zac Efron belong, Gormican was then allowed to complete his directorial debut, which was able to recoup at least three times its manageable budget in the US.

The result feels like a male version of Sex and the City in many places, with the libidinous Daniel somewhat reminiscent of Samantha and the longing-for-a-happy-family Mikey reminiscent of Charlotte. And Jason seems to have found his equivalent of Carrie's Mr. Big in Ellie. And so the many conversations between the three friends also revolve primarily around superficialities and sex. And just like in Sex and the City, the desire for love and a life of togetherness is hidden beneath the surface, with the three young men increasingly revealing their inability to say goodbye to their single lives. In the wake of the success of Sex and the City, broadcaster HBO had already attempted to transfer the successful formula to a material for men in 2001 with the series Mind oft he married Man. But although the series was very true to life and funny, the audience stayed away and after only two short seasons was over again. The reason for this might be exactly the problem that Forever Single also has to struggle with.

Because while the ladies from Sex and the City became style icons and big city heroines for their fans, the men of creation, who have to struggle with very similar problems, are rather degraded to pathetic sausages. True, there are some very funny moments in the film that men in particular can laugh heartily at. But they are not enough traction to make you accept being confronted with your emotional inadequacies. Women, on the other hand, probably don't want to listen to the very raunchy conversations of the three friends any more than they want to see what a man comes up with to be able to pee with an erection.

Forever Single is not a bad movie. On the contrary. Thomas Gormican has written some very well-observed moments into his screenplay, and he's also infused the whole thing with a great deal of wit and a fair amount of big-city romance. So you can forgive the one or other platitude with pleasure. The problem of the movie is its target audience. It's not a real teen comedy, although some of the gags are obviously based on the genre. It's not a proper couple's romance, and it's certainly not a proper guy's movie. Rather, the comedy is something in between and therefore seems a bit indecisive. Still, if you're not put off by the very explicit language and if you want to learn more about the heartbreak of male big city singles, you'll be treated to 90 thoroughly entertaining minutes with likeable actors and some atmospheric shots of New York. And that is then in the end with some minor deductions still enough for a: Worth seeing!