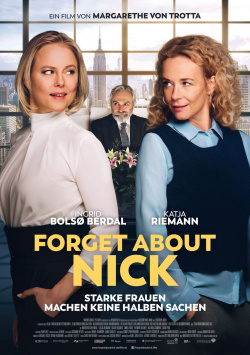 Life doesn't really seem to mean well for former model Jade (Ingrid Bols&oslash; Berdal). It's bad enough that she's been abandoned by her husband Nick. Now his first wife Maria (Katja Riemann) is also standing in their New York luxury loft, claiming ownership of the posh abode. By necessity, the two women must now live together until they find a solution. Since Jade is trying to start her own fashion label, selling the loft would be just what she needs. But Maria doesn't even want to think about that. More and more, Jade and Maria's opposing views collide, inevitably ending in absolute chaos.

Margarethe von Trotta is not necessarily known for light, humorous entertainment. And after a long 109 minutes that Forget about Nick lasts, it's clear why. The filmmaker, who has not only proven herself to be a good storyteller with dramas like Hannah Arendt or Rosenstrasse, but has also regularly brought her leading actresses in particular to top performances, lacks any craftsmanship here. For a comedy, the film is clearly lacking in wit and especially in coherent timing.

There are repeated scenes that are either far too broad, or that seem so short and choppy that they are actually completely meaningless to the actual story. In the second half of the film the already bumpy pace is slowed down by von Trotta's indecisiveness as to whether she should perhaps make a drama out of the whole thing. In addition, she simply doesn't succeed in making the characters in her story seem believable. Nick, for example, shows so little charisma in his appearance that it's not comprehensible for a second why Jade is so infatuated with this clearly older gentleman. Even the character of Maria, which Katja Riemann in particular could have played with a lot more bite and sarcasm, remains shockingly superficial.

Aside from a few pretty New York shots, Forget about Nick doesn't really offer any reason why you should spend nearly two hours with uninteresting characters in a really petty, predictable story. The basic situation may sound amusing, and with a little more pacing, snappier dialogue, and characters with more rough edges, it might have even made for a good comedy. But here it's more like: certainly well-intentioned, but completely off the mark and therefore not really worth watching!

Cinema trailer for the movie "Forget about Nick (Deutschland/USA 2017)"
Loading the player ...