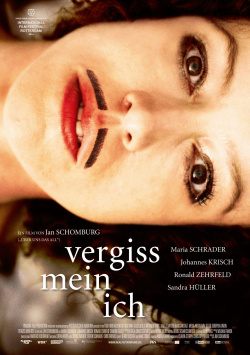 An undiagnosed meningitis has fatal consequences for Lena Ferben (Maria Schrader). Her career, her marriage to Tore (Johannes Krisch), her friends - all this is from one moment to the next no longer retrievable in her memory. Lena suffers from retrograde amnesia, no longer has access to her biographical memory and can no longer interpret emotions. She has to learn all over again what it means to be sad or happy, who the people in her past life are and what made up her old self. Gates and her own journals are supposed to help her with this. But is memorizing and imitating all the memories and behaviors from an old life enough to truly become Lena again?

Inspired by a radio feature about a 40-year-old woman with complete retrograde amnesia, filmmaker Jan Schomburg has directed Vergiss mein Ich, a moving drama that uses Lena's story to address a very essential question: what actually constitutes the self? Is the woman, who has lost her biographical memory and forgotten all emotions, then Lena again, when she has perfected how to portray her old self? The film tells a difficult story that can only really work with the right leading lady. Fortunately, Schomburg has found it in Maria Schrader.

Schrader plays the woman searching for her self with oppressive intensity. You can literally feel her fear at the beginning, realize that she just doesn't understand what is happening to her and around her. The way she fights her way out of this situation is simply great acting. But also Johannes Kirsch as her desperate husband, who wants to do everything to get his Lena back, as well as Ronald Zehrfeld as a stranger fascinated by the new Lena, exploring her emotions, deliver very good performances.

Whether it's the very dramatic moments between Lena and Tore, the surprisingly explicit sex scenes, or the very subtle humor that is ever-so-slightly evident, all of this combined with the great actors and the interesting as well as moving story make Forget Me one of the true arthouse highlights of the year. It's not an easy film to watch, the production a little unwieldy and exhausting at times. But it is more than worthwhile to get involved with it. Who appreciates challenging program cinema from Germany, should not miss this very special drama, if only because of Maria Schrader. Worth seeing

Cinema trailer for the movie "Forget My Me (Deutschland 2014)"
Loading the player ...