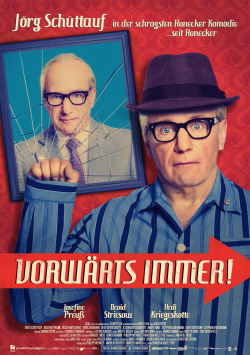 East Berlin on October 9, 1989: Actor Otto Wolf (Jörg Schüttauf) is not having a good day. First he has a fight with his daughter Anne (Josefine Preuß) and then he also has doubts whether he should really dare to play Honecker in the unauthorized play Vorwärts Immer. And yet, in his mask, he looks just like him. But when he learns that orders have been given to shoot down the demonstrations against the GDR regime planned for that evening in Leipzig, Otto has to act. For he knows that Anne will be in Leipzig. And so he and his fellow actors devise a crazy as well as dangerous plan: while the real Honecker is on a hunting trip, Otto is supposed to take over his role and stop the shooting order. And at first, it even seems to work, until Margot Honecker shows up.

Forwards Always! manages a difficult balancing act. On the one hand, of course, the film doesn't want to trivialize events that were very dramatic for everyone involved. On the other hand, as an exaggerated satire, the whole thing is meant to be one thing above all: fun! Director Franzsika Meletzky has found a very good balance. She primarily uses finely drawn humor that never really falls flat even when it degenerates into slapstick. Apart from the really weak final gag in the last second and a few not-so-well-done exceptions, the humorous moments of the film work because of the good dialogue wit, delightfully absurd situation comedy and the wonderful acting of the cast.

Next to Jörg Schüttauf, who thrills as the real as well as the fake Honecker, especially Devid Striesow as Otto's actor nemesis and Alexander Schubert as the fake Egon Krenz with stubborn dentures are simply marvellous. Often it's just little glances or facial expressions from the actors that make for some really hearty laughs. This could easily have become completely silly and flat, but Meletzky always manages to get his act together at the right moment. The filmmaker also proves to have a good hand when it comes to pacing: she doesn't rush through the story and gives her characters room to develop, while at the same time the dialogue and some wonderful little gags are served up very briskly, which significantly increases the entertainment value.

Forwards Always! is, with a few minor drawbacks, a very successful satire about the last days of the GDR and a very well-written comedy of errors that is fun to watch without having to make use of flat gags below the belt. Great acting and refreshingly light-footed staged, I give it a very clear: Absolutely worth seeing!