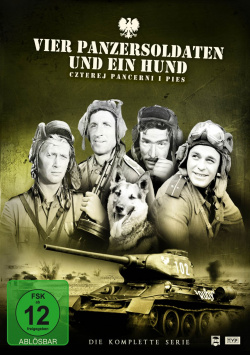 Four Tank Soldiers and a Dog - The Complete Series - DVD

Content: The series Four Tank Soldiers and a Dog is probably one of the most successful international series that have run on GDR television. Already during the original broadcast of the 21 episodes between 1968 and 1972, the adventures of the tank soldiers Janek, Olgierd, Grigorij and Gustlik and their sheepdog Scharik were able to acquire a loyal fan base, which grew steadily until the last broadcast in 1987. And even today, the Polish hit series has many enthusiastic followers, who can be very pleased that the Pandastorm Pictures label has released a DVD edition of the complete series, created with much care, effort and passion.

Four Tank Soldiers and a Dog tells the story of young Janek (Janusz Gajos), who is actually far too young to become a soldier. But when a Polish division is to be formed, Janek does everything he can to become a part of it, to fight for his country against the German Wehrmacht in memory of his father, who was supposedly killed in action. With a ruse helped by his faithful companion, Scharik the shepherd dog, Janek manages to be accepted as a tank soldier in the crew of the T-34 tank with the number 102, which is later christened Rudy by the troops. Hard battles, arduous marches and long conversations weld the men together. The way from Siberia via Russia to Berlin costs the men many sacrifices. They lose friends and Rudy is also almost destroyed. But nothing can break the community. In the turmoil of war, Janek grows up faster than he would like into a young man who learns a lot about courage, friendship and about love.

Surely, Four Panzer Soldiers and a Dog seems dramaturgically a bit dusty at times after more than forty years, and the staging seems rather unintentionally funny at some moments. Especially moments in which shot soldiers fall to the ground much too late after the shots or in which a car that is rammed by Rudy tips over before it is even touched by the tank, can't keep up with more current war series like Band of Brothers or The Pacific that try hard to be realistic. The series can also be accused of an overly one-sided picture of the enemy and almost propagandistic tones. But since that, as is also correctly mentioned in the booklet, is truly not a rarity for this genre, this point of view should not be pursued too critically.

For all its flaws, The Adventures of the Tank Soldiers is a very entertaining piece of TV history. Because the series takes a lot of time to establish the characters and trace the building of their close camaraderie, the viewer soon feels like part of the troops. It also helps that the main characters are very likeable and have been charmingly embodied by the actors. Certainly, the series reveals a certain distance from reality here and there, but on the other hand it manages to approach a rather difficult subject matter with a refreshing lightness of touch, without completely avoiding the tragic and dramatic aspects.

Since the series still has many loyal followers today, as mentioned above, this DVD release is also primarily for them. A nice way to be able to immerse yourself in pure nostalgia. And for this the makers of the DVD box have really made an effort. The old masters have been completely re-scanned and all the episodes have been pressed onto the discs in full length. Although there is also the possibility to watch only the often shorter GDR version, only the full length (the non dubbed parts were provided with German subtitles for this) is the ultimate pleasure for fans. Four episodes that were already off the air during the last GDR broadcast and whose dubbing has completely disappeared have been re-dubbed especially for this DVD release. Sure, it's a bit strange when Janek and his comrades suddenly have different voices. But once again it becomes clear how much effort has been put into the DVD conversion of the cult series. Quite a few much bigger productions could take an example from this!

Whether you are a fan of the first hour or only now get to know the crew of Rudy and follow them for the first time on their difficult way through the turmoil of World War II, this DVD box set can only be warmly recommended to you.

Image + Sound: For the DVD release, all episodes have been lavishly remastered, and the end result shows it. Sure, the picture is a bit choppy at times, with little blurs and smudges here and there. But overall, the picture quality has turned out very well for such an old source material. The audio is in a good stereo mix with the dialogue dominating the action. The sound effects, such as explosions, gunfire, or the sound of Rudy driving, add a bit of movement to the tonal action. The episodes that have been re-dubbed for this release are mixed a little more powerfully than the original dub. But even for these, the bottom line is a well-deserved: good!

Extras: In addition to the long versions of the individual episodes, which can undoubtedly be considered a bonus, the DVD box set also has a booklet with a fairly detailed episode guide to offer. If you want more extras, you'll have to reach for the lavish limited tank edition, which has a bonus DVD with more extras on board.

Conclusion: Four tank soldiers and a dog is pure TV nostalgia. The DVD box set of the complete series was realized with a lot of effort and passion and is therefore a real gift for all fans of the series. Completely remastered and containing both the shorter GDR versions and the Polish long version, this box set is a must-have for everyone who can't get enough of the adventures of the four tank soldiers. Absolutely recommendable