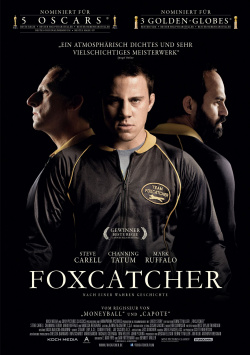 Although he won a gold medal in wrestling for the USA at the 1984 Olympic Games in Los Angeles, the hoped-for fame and fortune for Mark Schultz (Channing Tatum) unfortunately failed to materialize. So he leads a dreary life in poverty and loneliness. Only the regular training sessions with his older brother Dave (Mark Ruffalo) give him some support. But then Mark gets an offer that could change his life forever: The billionaire John du Pont (Steve Carell) invites him to move to his feudal estate to train with the US wrestler team Foxcatcher for the 1988 Olympic Games in Seoul. While Dave, who is mentored by Mark, is reluctant to accept the offer, Mark is quickly excited about Du Pont and his eccentric lifestyle. And so he enters into a dangerous dependency that soon assumes a disastrous momentum of its own, heading for a catastrophe…

"Foxcatcher" is based on true events that director Bennett Miller ("Capote") has researched through personal conversations with participants such as Mark Schultz as well as through archive footage, newspaper articles and other contemporary documents. He also worked closely with the US wrestling community to achieve the best possible level of authenticity in the wrestling scenes. This meticulous research also enabled the leading actors Channing Tatum, Steve Carell and Mark Ruffalo to prepare for their roles. Carell in particular succeeds in disappearing completely behind the figure of the eccentric billionaire, supported by the excellent work of the make-up artists. The result is intense and at times almost frightening actor cinema at its best. The fact that Mark Schultz completely distances himself from the film and is not very happy about the way he and his brother are portrayed in the film does not change much.

Miller succeeds very well in creating an oppressive atmosphere that inevitably leads to a catastrophe. No matter if you know in advance how the story ends or if you are completely surprised by the events in the last act, the whole thing is intense. However, the celebrated filmmaker takes a bit too much time on the way there. Especially at the beginning he strains the nerves of the audience with a completely unnecessary slowness. As a spectator, you have long since understood what a bleak life the completely disillusioned Mark leads, before Miller shows for minutes how he prepares ready meals surrounded by grey monotony and clings to the few memories of his short Olympic glory.

However, even if the story then finally gets a little moving after a felt eternity, the staging indulges in bulky leisureliness. This works very well because the initially invisible downward spiral in which the brothers are trapped can develop its full intensity. On the other hand, some scenes seem to be extremely viscous due to this staging style that takes getting used to, which could make both the story and the characters difficult for many viewers to access. The somewhat exhausting soundtrack intensifies this impression even more.

You have to be able to get involved with it, in order not only to fully understand the strength of the acting performances, but also the power of the story. Only when this succeeds does "Foxcatcher" turn out to be an oppressive and stirring drama that gives its actors the opportunity to reveal completely new facets of their abilities. That's certainly nothing for the broad mass taste, but if you like to approach food that is difficult to access and appreciate intensive acting cinema, you shouldn't miss this film. Worth seeing

Cinema trailer for the movie "Foxcatcher (USA 2014)"
Loading the player ...