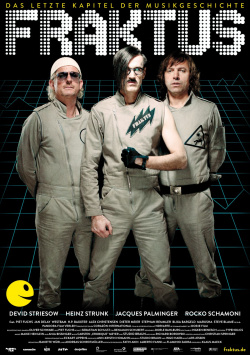 It's about time! Finally FRAKTUS, the forefathers of techno, are getting the appreciation they deserve. Over 25 years ago, the trio split up in a falling out. And although their musical influence can still be heard everywhere today, FRAKTUS themselves have almost completely disappeared from the collective memory of the music scene. Until now. Because now music manager Roger Dettner, who looks amazingly like actor David Striesow (Three), has set himself the lofty goal of bringing FRAKTUS back together and reminding the world of the great sound tinkerers of the early 1980s.

Fraktus accompanies Dettner on his revolutionary endeavor. The documentary reviews the band's short but intense history, from their formation to their only chart success, Affe sucht Liebe, to initial tensions and the disastrous concert in Hamburg in November 1983 that finally put an end to the FRAKTUS chapter. But even though the band no longer existed, their sounds had a lasting impact on the techno scene in particular. In interviews, numerous musicians such as Westbam, H.P. Baxxter from SCOOTER, Jan Delay, Marusha or Dieter Meier from YELLO reveal why the music world would look very different today without FRAKTUS.

The sadder it is, of course, what has become of the geniuses of yesteryear: singer Dickie Schubert runs an internet cafe, Bernd Wand works in his parents' optician shop and desperately tries to launch FRAKTUS II with mum and dad. And finally Bernd Wand wastes his talent on Ibiza with the production of commercial Eurodisco ballermann hits for C-celebrities like Willi Herren. Although the three once broke up in a quarrel, Dettner actually manages to persuade them first to meet together, and then even to work together again. But the first recordings and a festival appearance turn out to be a disaster. In Fraktus, filmmaker Lars Jessen documents the desperate attempts of misunderstood geniuses to get the career they cheated themselves out of after more than 25 years. While the first part of the film offers an interesting excursion back to the 80s and traces the band's history briefly but in great detail, the attempt to reanimate FRAKTUS becomes increasingly chaotic and takes on almost tragic features. Here the film also leaves the realm of the ordinary documentary and becomes a similarly idiosyncratic work itself, just as the trio's music was (and still is). Whether or not their comeback will be a lasting success remains to be seen. Fact is, FRAKTUS are a phenomenon in their own way, which is simply fun to discover. Clearly: if the band didn't really exist, it would have to be invented. Because a world without FRAKTUS would look a lot greyer - unless FRAKTUS II would finally make it out of the living room of the Wand family and onto the stages of Germany. But you can't have everything!

By the way: Besides a tour to the movie, the songs of the band are finally available for sale again! So a whole new generation can discover the songs that have shaped the German music scene so much

Cinema trailer for the movie "Fractus (Deutschland 2012)"
Loading the player ...