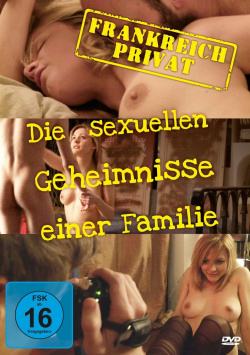 France Private - The Sexual Secrets of a Family - DVD

Movie: After her son Romain (Mathias Melloul) is caught masturbating in class and filming it on his cell phone, alarm bells start ringing for mother Claire (Valérie Maës). Until now, she was convinced that she and her husband Hervé (Stephan Hersoen) had raised their three children in a totally open manner. But now she realizes that she has completely suppressed the topic of sex after all, which prompts her to have a frank conversation with the family to ask them to be open about their sexuality and not be ashamed of wanting to explore it further. And even though further within the family the topic is not really talked about loosely, not only the children Romain, Marie (Leila Denio) and Pierre (Nathan Duval), but also Claire and Herve start to live out their sexuality more intensely. And even Hervé's widowed father Michel (Yan Brian) admits that he still has desire and longings at his age.

France Private - The Sexual Secrets of a Family sheds light on how different generations of a family deal with their sexuality, their desires, inclinations and feelings in a delightfully uninhibited way. Whether it's the teenager who has yet to learn the difference between lust and love. His brother who is finding his sexual identity. The sister who has to realize that she can't force love with sex. The parents, who also find fulfillment in a certain habit. And finally, the grandfather who has a very special relationship with a prostitute (Laetitia Favart). Each member of the family is a sexual being whose identity, everyday life and love is shaped by how they deal with their own personal needs.

In addition to the very aesthetically realized sex scenes, the film also has some very nice character moments and amusing dialogue to offer. The conversation between Claire and her widowed father-in-law, for instance, is very emotional and not awkward, which it easily could have been due to the subject matter. And when she tries to find out more about Pierre's love life over a meal together afterwards, while Hervé rather awkwardly tries to have a man talk with Romain at the same time, it is extremely funny because of its closeness to reality.

What gives the film its very special touch is the authentic portrayal of the different kinds of sex. Romain's shy approach to his beloved Coralie (Adeline Rebeillard) and their first tentative touches have so nothing in common with the way Pierre acts out his sexuality. Of course, one can question whether it is really necessary to show the different love games in such bluntness, which already in the softer FSK 16 version leaves little room for the imagination. But on the other hand, this open and uninhibited portrayal of sex is only logical, as this is the actual theme of the film. If the two directors had only let their characters talk about it, but had then faded down during the sex scenes or still let the characters wear their underwear or let the whole thing take place demurely under the covers, they could rightly have been accused of a certain mendacity.

Although some scenes come across as a bit too gossipy and the film ultimately lacks a bit of dramatic depth for all its authenticity, France Private - The Sexual Secrets of a Family has become, on balance, an entertaining mix of drama, humor and eroticism. If you like French arthouse entertainment of the more revealing kind, you can safely get into bed with the Betrand family. Worth seeing!

In addition to the FSK 16 version reviewed here, the film is also released in an uncut version that is just under 6 minutes longer and is only released from the age of 18.

Extras: Also the bonus material could not be sighted on the press DVD. Announced are the trailer and interviews with cast & crew.