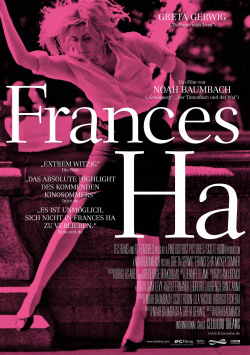 Frances (Greta Gerwig) loves to enjoy life in her small New York apartment with her best friend Sophie (Mickey Sumner), talking about men, love and life itself. And when she's not with Sophie, she's pursuing her other great passion: dancing. But since Frances is bad at dancing, she is not accepted by her company for the big Christmas tour. Then her relationship with her boyfriend breaks up and Sophie wants to move into another apartment. No job, no boyfriend, no apartment - can life get any worse? When she meets maladjusted Benji (Michael Zegen), everything seems to take a turn for the better. But this encounter is just the beginning of an odyssey that takes Frances from apartment to apartment and job to job. She seems to lose sight of her real goals and desires, unaware that she is in the process of finding herself.

Frances Ha is the second collaboration after Greenberg between director Noah Baumbach and actress Greta Gerwig, who also worked on the screenplay. This whimsical portrait of a neurotic twenty-something in New York evokes memories of Woody Allen's early films for its black-and-white visuals alone. But Frances Ha's dialogue generally lacks the cleverness that made films like Manhattan timeless classics. Rather, the conversations Frances has with her friends are more reminiscent than Lena Dunham's award-winning series Girls. Like that series, Baumbach's comedy centers on young people from the urban middle class who are often referred to, somewhat derisively, as hipsters because of their somewhat strained nonconformity. Efforted is this non-conformity because it has long since become a widespread movement with its own conventions, which is thereby transformed back into a certain conformity.

And that is exactly what is true of Frances Ha. The film attempts to play outside the norm, but clearly follows the rules of American independent cinema. Greta Gerwig's Frances Ha is very reminiscent of the character she recently played in Lola Against the Rest of the World, although Frances comes across as even more neurotic than the relationship-damaged Lola. Thanks to Gerwig's performance, Frances is extremely charming, but runs the risk that her flippancy, which screams "Find me wonderful", won't have the same effect on all viewers and that, like Sally Hawkins in Happy-go-lucky, there will be many who won't find Frances charming, but simply exhausting. Because let's be honest: even if you could fall in love with a person like Frances in the movie, with a chaotic and yet very ego-centered person like she is, you would probably only be friends for a very short time in real life.

But luckily life is banished to the outside in the cinema with the extinguishing of the hall light and so you are allowed to find things adorable here that you would be terribly upset about in everyday life. But you have to succeed at that to like Frances Ha. You have to succumb to Greta Gerwig's charm to be able to appreciate the film's amusing and warm-hearted sides. Then the good timing of the dialogues and the many small endearingly amusing details found in the actors' acting and facial expressions, in the sets and in the music selection also reveal themselves. Here, the comedy turns out to be an extremely well-observed generational portrait that takes the worries and woes of its protagonists quite seriously, but filters them through a refreshing lightness of touch, achieving not frustration but hope and good humour in the end.

Who likes movies like Manhattan, Oh Boy or the series Girls will surely be charmed by Greta Gerwig's dancing Frances and thus also fall for the charm of this little indie comedy. Those who don't, however, will find Frances rather annoying and her self-discovery trip extremely trivial. That's why the more than deserved "worth seeing" is only given with small deductions!