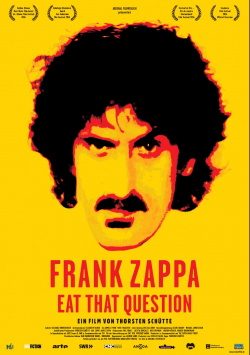 Frank Zappa was a real all-round talent: musician, composer, artist, producer, autodidact. He was someone who didn't care about conventions, who didn't want to be pigeonholed, and who liked to give moralizers and the establishment the symbolic middle finger with his lyrics. He always made exactly the kind of music he wanted to make, no matter if he would have commercial success with it or not. And that's exactly what made him one of the most important mouthpieces of an entire generation. Documentary filmmaker Thorsten Schütte has now attempted to capture Zappa's provocative genius in a film in close cooperation with Zappa's family. He could have interviewed any number of companions, admirers and experts. But Schütte prefers to rely on the person who can best show who Frank Zappa was: Frank Zappa himself.

From vast amounts of partly very rare archive material Schütte has created with Frank Zappa - Eat that Question much more than a simple artist biography. One learns a lot about the life and career of Frank Zappa, sees his first appearances in US shows or can listen to his first musical attempts. But beyond that the viewer gets by the fact that Zappa mostly speaks here himself, a deep and pleasantly differentiated insight into a highly interesting artist soul offered, which was far more than the scandalous musician, which especially the conservative media have always seen in him.

Even if you have little or no familiarity with the music of Frank Zappa, this documentary has become extremely exciting and entertaining. From the mass of material, he has selected really great interview and performance sequences, not taking a linear approach in the compilation. Thereby he sets very interesting contrasts and shows how much Zappa has changed on the one hand, but how much he has always remained true to himself on the other hand. A really worth seeing documentary, which is not only a must for music lovers! Absolutely worth seeing!