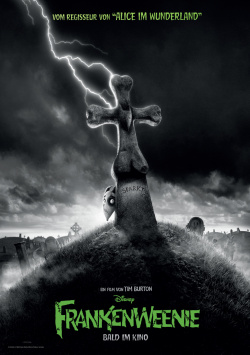 After earning his spurs as a cartoonist at Disney (including Cap and Capper) in his younger days, Tim Burton was commissioned by the studio to try his hand at directing the short film Vincent in 1982. After this successfully screened at a number of festivals, Burton went on to submit the short Frankenweenie, a black-and-white homage to Frankenstein and other monster movies, before his first feature, Pe-wee's Mad Adventures, in 1984. The film has always held a very special place in Burton's heart, and he long dreamed of making a feature film version of the story that would be more in line with his concept drawings than the short. Almost thirty years later, that wish has now become a reality. Still black and white, but this time as a stop-motion animated film in sleek 3D, Frankenweenie finally returns.

The film tells the story of young schoolboy Victor Frankenstein, a passionate amateur filmmaker who loves only one thing more than his filmmaking: his dog Sparky. When the latter is run over while chasing a baseball, Victor is heartbroken by the dog's death. But luckily, Mr. Rzykruski's biology class includes the effects of electricity on dead frogs. Victor immediately sets out to put what he learned into action and bring his beloved Sparky back from the dead. With the help of all sorts of household appliances and a powerful thunderstorm, Victor manages the unbelievable and is finally able to hold his dog in his arms again. Of course, the whole thing has to remain a secret, because Victor is sure that neither his parents nor the other inhabitants of New Holland would have any understanding for the fact that the boy has defied the laws of nature. It's just too bad that his classmate Edgar Gore, of all people, catches Victor's eye and demands that he repeat the experiment on his deceased goldfish if he'll keep his mouth shut. Reluctantly, Victor agrees, setting in motion events that throw all of New Holland into chaos.

With much of the team Burton had previously worked with on the stop-motion animated film Corpse Bride, over 2000 puppets, 200 sets, and 1300 visual effects were created over several years, all captured in 24 frames per second of film. The result is quite an enchanting homage to B-movies and classic monster movies, sticking very closely to the short film template for the first third. Some scenes feel like a direct stop-motion adaptation of the live-action film template. It becomes especially clear that the whole thing simply works better as an animated film, because Burton can give the characters, the houses and landscapes his own, very special look much better than he was able to do with his short film.

The film is full of small, loving and also very funny details, which you can not discover at a single viewing all. Just a close look at the gravestones in the cemetery where Victor buries Sparky makes for some nice little laughs. Those who know a little about the genre will also be able to spot many references to classic monster movies, which make it clear how much love for the subject Burton and his team have put into the story about a boy's very special friendship with his dog.

However, even though Burton in itself does a good job of stretching the short story to feature length, presenting a good mix of rather simplistic but thoroughly effective humor and very emotional moments, the animated film ultimately lacks that special something. There's no question that Frankenweenie is entertaining, endearing, and extremely funny. And it's undoubtedly Burton's best film since Corpse Bride. But it lacks some of the subversive bite that made Burton's early films so special. However, especially when compared to other contemporary animated films for children, this 3D adventure is already a more than welcome change visually. Despite a few scenes that overshoot the mark a bit and seem a little too silly, there's more emphasis on the story and characters here than on heavy-handed humor and 3D roller coaster effects. It's just fun to dive into this endearingly quirky world, and here's hoping that not too many parents will be put off by the black-and-white visuals and rather old-fashioned story. Because Frankenweenie is not only a film for young-at-heart Tim Burton fans, but also for open-minded children. And for this there is only one possible conclusion: absolutely worth seeing!

Cinema trailer for the movie "Frankenweenie (USA 2012)"
Loading the player ...