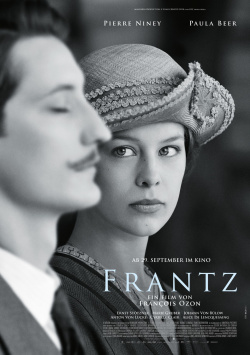 World War I has taken away Anna's (Paula Beer) great love. Grief drives her every day to the grave of her fiancé Frantz, who was killed in France. But one day, flowers on the grave love that are not Anna's. It turns out that the young Frenchman Adrien (Pierre Niney) put them there. When Anna confronts the stranger, he tells her that he had been friends with Frantz. What he tells about the deceased helps not only Anna, but also Frantz's parents considerably in coping with their grief. But Adrien is haunted by a dark secret.

More about Frantz, the new film by Fran&ccedil;ois Ozon, shall not be revealed. Ozon succeeds very well in leading the viewer astray and even though some of the plot twists are quite predictable, the journey to get there is absolutely rewarding. The director takes a lot of time to tell the story, which is set in elegiac black and white imagery, while also playing with color here and there, which acts like a glimmer of hope in a time defined by grief, prejudice and guilt. Ozon's production is elegant, extremely compelling and touching despite its slowness. Greatly played by Paula Beer and Pierre Niney, this drama is another example of the French filmmaker's versatility and unpredictability.

Frantz is full of poetry and truthfulness, even if the last act in particular feels somewhat contrived. In a very moving way, the film poses the question of guilt, atonement and how important forgiveness is for coping with grief. In doing so, it becomes very clear with very discreet means that there can only be losers in a war. It is the great strength of this drama that the message is not beaten around the ears of the viewer, but that Ozon goes to work here subtly and sensitively in every respect.

A heavy subject, a very slow narrative flow and black-and-white imagery - it sounds like rather unwieldy, cerebral arthouse cinema. That may be true in parts, but the bottom line is that Ozon has succeeded very well in making the story and its characters accessible to the viewer, which intensifies the emotional impact enormously. This makes Frantz a powerful, haunting and moving film, for which there is a very clear Absolutely Worth Seeing!

Cinema trailer for the movie "Frantz (Frankreich/Deutschland 2016)"
Loading the player ...