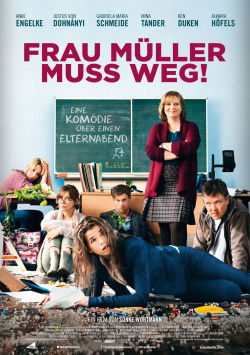 Fearing that their children will not make the transition to high school because their class teacher seems to be completely overwhelmed and incompetent, the parents of an elementary school class are clear. Mrs Müller must go. Representative for all parents are Wolf (Justus von Dohn&aacute;nyi), the single parent Katja (Alwara Höfels), the couple Patrick and Marina (Ken Duken & Mina Tander) as well as the resolute Jessica (Anke Engelke) in an extraordinarily convened parent-teacher conference submit to the teacher (Gabriela Maria Schmeide) their collective request to resign. But Mrs. Müller reacts differently than expected. She confronts the worried parents with her view of things - and this degenerates into a ruthless reckoning that tears down every facade, no matter how perfectly constructed, of the parents present. And suddenly the battle for the children's education is being fought on entirely new battlefields.

That Frau Müller muss weg is based on a play is definitely noticeable in the film. Especially in the first third, which takes place almost entirely in the small classroom, seems quite chamber play-like in its amusing way. Nevertheless, director Sönke Wortmann manages very well to break out of the stage format and to show that this in essence rather small material is also well suited for the big screen. Of course, this is primarily due to the script, which Lutz Hübner and his wife Sarah Nemitz, the authors of the play, also co-wrote. The dialogues are so funny precisely because they are sometimes so painfully close to reality. Anyone who has ever witnessed a discussion during a parent-teacher conference will recognize much of what is said here. Admittedly, every now and then the verbal battles could have been a bit nastier and more biting. But all in all, there are enough successful moments that make the story an absolutely spot-on satire about the modern school system, about educational methods, but also about the relationship between East and West 25 years after the fall of the Berlin Wall, which is still not entirely free of prejudice.

The fact that the comedy works so well, however, is not only due to the script and the direction. First and foremost, it is the very well chosen ensemble that makes this horror parenting evening so worth watching. This is especially true of Anke Engelke, who is at her best as the tough and naturally infallible career mom. But Justus von Don&aacute;hnyi as the overprotective father and Gabriela Maria Schmeide as Frau Müller also quickly prove to be perfect casting. Watching this ensemble quarrel and dismantle their bourgeois facades is a real pleasure - even if the well-observed realism does occasionally make you laugh your head off.

Sönke Wortmann, who also directed the play at the GRIPS Theater in Berlin, almost completely resists the temptation to let the verbal battles get too out of hand. Only rarely does he play the slapstick card alongside the dialogue. Such moments might seem a bit flat in direct comparison to the sometimes very clever dialogues. However, they don't really bother the viewer. Rather, they underline the overall impression of a fun cinema comedy that not only offers its viewers the opportunity to laugh, but also plenty of material for mutual exchange after the cinema visit. Because even if the characters and the plot itself seem slightly overdrawn in some ways, many viewers will feel reminded by them of parents from their personal environment and their own experiences. And for this Frau Müller muss weg has then also despite minor point deductions in the B grade clearly earned an Absolutely worth seeing!

Cinema trailer for the movie "Mrs. Müller must go (Deutschland 2014)"
Loading the player ...