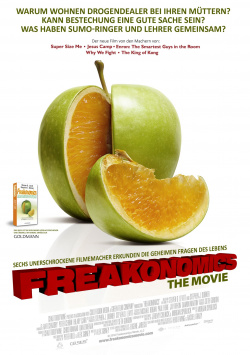 When journalist Stephen Dubner and economist Steven Levitt published their joint book Freakonomics in 2005, they firmly assumed that they would not be able to sell more than 80 copies of their work. After all, the book was a collection of scholarly articles that did not always make use of very popular or common theories. But their rather pessimistic expectations were soon to prove an absolute misjudgement. For with translations in 35 languages and over four million copies sold, the book has become a worldwide non-fiction bestseller. Now, acclaimed documentarians Morgan Spurlock (Super Size Me), Alex Gibney (Enron: Smartest Guy in the Room), Eugene Jarecki (Why We Fight), Seth Gordon (King of Kong), and Rachel Grady and Heidi Ewing (Jesus Camp) have teamed up to explore key aspects of the book in several episodes.

The result is an entertaining as well as interesting documentary, which lives not only from the different stylistic signatures of its makers, but of course primarily from the sometimes quite idiosyncratic theses of the book template and its cinematic treatment. Morgan Spurlock, for example, poses the question of how much a child's name influences his or her chances for the future in his or her usual loose and biting way. Can a Chantal become Chancellor, is a Tyrees destined for a great career, or are high-paying jobs only for the Johns and Stevens of this world? Alex Gibney then turns his attention to the widespread issue of cheating in our society, using sumo wrestling as an example. Indeed, in this sport, which for many still symbolises honour, tradition and honesty, cheating is common - which for Gibney epitomises what we have seen in the great banking scandal of recent years.

Continuing with the question of cause and effect. Here Eugene Jarecki explores the authors' theory that the legalization of abortion was a significant factor in the drop in crime rates in the 1990s. Finally, Rachel Grady and Heidi Ewing document an experiment that sought to determine whether financial incentives could lead to better grades among students. Connecting these four segments are smaller introductory chapters directed by Seth Gordon.

Like the book, the film aims to show what motivates people and that commonly held, often very entrenched opinions are often wrong. The viewer is offered theories that do not represent facts, but should only serve as an incentive to open the mind and allow to see the world sometimes with other eyes. Because only then the many complex problems we are confronted with in everyday life can be better understood and solved. The realization of the whole thing is a successful mixture of interviews, graphics, animations and re-enacted scenes. While not all segments are equally successful - Gibney's contribution, for example, is far too long - overall, Freakonomics is a very entertaining documentary that is not only fun to watch, but actually makes you think and rethink. And for that it gets a more than deserved: Worth seeing!

Cinema trailer for the movie "Freakonomics (USA 2010)"
Loading the player ...