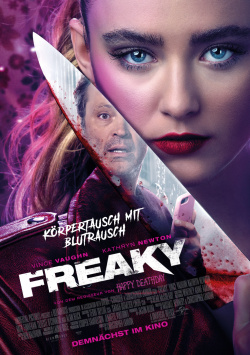 Soonly done: For Millie Kessler (Kathryn Newton) the end of high school time is within reach and then her life can finally begin properly. Too bad that now of all times the brutal serial killer 'Blissfield Butcher' (Vince Vaughn) in the city his mischief and also meets Millie. But it doesn't end in the teen's death. As she tries to escape the killer, an ancient curse is accidentally triggered, causing the two to switch bodies. If Millie can't break the curse within 24 hours, she'll be trapped in the killer's body forever. But how is she to succeed when the whole town is after her, believing that she is the 'Blissfield Butcher'. But then she manages to convince her friends Nyla (Celeste O'Connor), Joshua (Misha Osherovich) and her secret crush Booker (Uriah Shelton) that she is indeed Millie and together they take on the Capef - against the Butcher and against time....

The idea behind "Freaky", while not new, is then rather unusual for this genre. A typical body-switching comedy crossed with a bloody teen slasher. This has a lot of potential, which director Christopher Landon ("Happy Deathday" 1 + 2) also exploits entertainingly in many moments. There are the usual "Oh my God, I'm in an old man's body" moments, some slapstick, but also some pretty gory kills. Particularly convincing in this genre mix is Kathryn Newton, who is convincing as both a sympathetic schoolgirl and a stone-cold killer. Vince Vaughn, on the other hand, is especially convincing as his serial killer alter ego, while his portrayal as a teenage-girl-caught-in-a-man's-body seems overdone in places. At least you can tell how much fun he had playing this unusual role. And that easily makes up for some weaknesses in his acting.

"Freaky" manages to do for long stretches what is apparently the intention of the flick: it's fun. But especially in the second half of the movie, when the body-swapping comedy has worn off a bit, it becomes clear that more could have been made out of the good basic idea. Personally, as a fan of the genre, I was hoping for a higher entertainment factor and maybe a few more macabre gags. The trailer had promised more than the film can ultimately hold in my eyes.

Despite this: Even if I was a little disappointed at the end, I have to certify "Freaky" that the film works well as a slasher comedy, even if not every gag hits the mark and even if a little more tension would have done the whole thing good. But if you want to lower your expectations a little bit and just want to be entertained, this is the right movie for you. Therefore, there is - despite all the weaknesses - a decent: worth seeing!