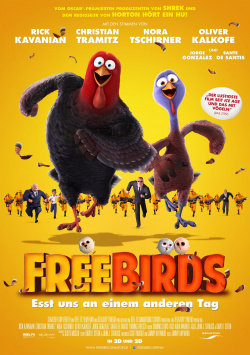 Free Birds - Eat Us Another Day

Year after year, many thousands of turkeys go down the tubes on Thanksgiving. Only one animal is assured survival when it is traditionally pardoned by the President of the United States. This year, the president's little daughter chooses the lanky Reggie (voiced by Rick Kavanian), of all people, who is now guaranteed a carefree life of luxury at Camp David. But after a short time, television and pizza are over when Reggie is kidnapped by the somewhat simple-minded Jake (Christian Tramitz). As a small fledgling, Jake had once appeared to the Almighty Turkey with the mission to infiltrate a military base together with Reggie and travel back in time in the time machine hidden there. The goal: to stop the tradition of always eating turkeys on Thanksgiving. Reggie, of course, thinks Jake is completely crazy at first, but a short time later actually finds himself in the year 1621. And this is where the adventure really begins.

Free Birds - Eat Us Another Day struggles with two problems. For one, the animated film, which is about Thanksgiving, is coming to our theaters at the wrong time of year. Secondly, it deals with a thoroughly American theme, the tradition and origins of which most people in this country probably only have a very rudimentary knowledge of from various Hollywood films and TV series. Therefore, one could assume that there might not be an audience for this animal animated film in Germany. But with a very well-chosen ensemble of voice actors and a funny time travel story, the film by Horton Hears a Hu director Jimmy Hayward could actually work well outside the U.S.

That is in some moments then actually the case. When the humor comes across as a bit quirky and not too over-the-top, the time-traveling turkeys are actually really fun. But unfortunately such moments are clearly outnumbered in the 90 minutes running time. Rather, chaotic action sequences and gags of the platter kind rule the proceedings. The quite original initial idea is almost completely buried underneath. Its potential shines through every now and then, but never fully unfolds. This is a pity, because there is a certain entertainment value and fun factor and Free Birds is saved from being a complete disappointment.

But a film that is only partially successful is often more disappointing than one that is simply bad from the start. And that really can't be said about this slightly different take on animal welfare. But the story simply lacks wit, the characters lack charm and the production lacks wit, in order to entertain not only sporadically, but consistently. In a time, in which many animated films entertain the whole family, this is simply too little.

So you could almost wish the makers that the very American theme would be their real main problem, one could have easily excused so some other small criticisms. But unfortunately Free Birds - Esst uns an einem anderen Tag (Eat us on another day) is only a half-baked pleasure, of which you definitely don't want to have a second helping. And for it there is then at the end also with the best will only one: very conditionally worth seeing!