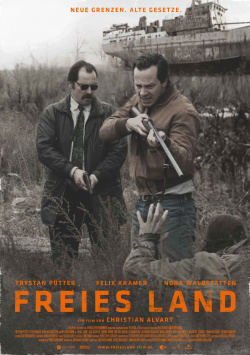 1992: In a small village in East Germany, two sisters have disappeared without a trace. Detectives Stein (Trystan Pütter) and Bach (Felix Kramer) are sent there to investigate the disappearance. Although children have disappeared from the village before, no one in the village seems to be really interested. Wherever the detectives look for clues, they encounter complete silence or monosyllabic answers that the girls are guaranteed to have run away to the West. But then the sisters' bodies are found and it becomes clear to the disparate investigators that they are dealing with a gruesome series of murders. But they can't count on help from the community now more than ever.

With Freies Land, director Christian Alvart atmospherically returns to his thriller Antibodies, the film that gave him his breakthrough as a filmmaker in 2005. However, his latest directorial effort comes across as a bit more unwieldy, which may be due to the bleak underlying mood. After all, the story is set at a time when hopes for a golden future after reunification have given way to harsh reality. People in rural areas in particular feel abandoned as more and more businesses close and young people move to the big cities in the west.

In this climate of anger, disappointment and mistrust, two very contrasting commissioners have to work together - one who doesn't always take the law very seriously and who understands the people from the region and one from the big city who often offends with his manner, and not only with his colleague. Alvart traces the two's investigations very calmly and almost without action, which clearly sets him apart from his last works, which also included the brute Til Schweiger TATORT entries. This is not necessarily easy to consume, but must be seen as a very positive artistic development.

It is also commendable that Alvart has cast his film not with the usual suspects, but rather with not-so-used-up faces. No Thalbach, no Peschel or no Finzi for a change - that's really refreshing. Visually, the film relies on dreariness, which admittedly somehow drags you down as a viewer. This also applies to the story itself, which is often more unpleasant than entertaining. Nevertheless, Free Land is a good and rousing thriller, which here and there seems a bit tough and a little thick, but on balance has a viewing value more than deserved!