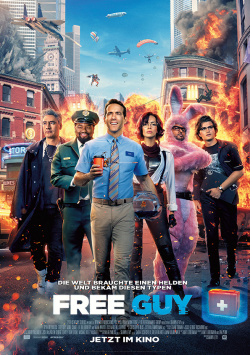 Guy (Ryan Reynolds) leads a simple but carefree life as an employee of Free City Bank. Always with a smile on his face and a positive attitude in his heart, he goes about his day. But then a mysterious woman (Jodie Comer) enters his life, and Guy accidentally learns an incredible truth about his existence through this encounter: he is nothing more than a background character in the popular open-world video game "Free City". But Guy doesn't let this throw him off track. He decides to use the rules that govern his digital world to become the hero of his own story - which could have fatal consequences for him and all of "Free City", because the game's creator (Taika Waititi) doesn't like the friendly video game character's popularity at all...

Free Guy", while not entirely new, feels refreshing and original in a cinematic landscape dominated by sequels, franchises and reboots - even if at many moments it feels reminiscent of other films like "Ready Player One", "The Truman Show" or "Ralph reichts". Shawn Levy, best known as the producer and director of the Netflix series "Stranger Things", among others, has created a thoroughly entertaining film that not only features colorful action, but also a really nice romance. You don't have to be a videogame fan to enjoy the comedic action portion of the film. But those who are familiar with the gaming world will additionally be amused by various allusions and cameo appearances.

There are also numerous such Easter Eggs and surprises for movie fans, most of which work really well. The finale, in particular, really kicks things up a notch in this regard. Admittedly: Not every gag fits. Some scenes are too silly to be really amusing. But fortunately these moments are absolutely negligible. Because all in all "Free Guy" is simply entertaining, amusing and above all charming. Many of the characters are very endearingly drawn. Of course, there is a villain, but he is portrayed by Taika Waititi in such an over-the-top way that it never really becomes threatening.

The film is not necessarily recommended for young children, but for 12 - 99 year old fans of light-hearted popcorn entertainment, this look into the lives of video game supporting characters is just the right fodder for two hours of entertaining reality escape. If you don't expect more from a movie and you like typical Hollywood blockbusters, you shouldn't miss "Free Guy". Absolutely worth seeing!