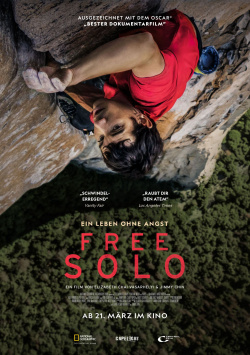 The challenge that El Capitan, one of the world's most famous crags, presents to even the world's best climbers could already be seen in the documentary Through-the-Wall an impressive picture. The film featured Tommy Caldwell and Kevin Jorgeson's attempt to climb the Dawn Wall. And in Am Limit, moviegoers witnessed the Huber brothers attempt to break the speed record at the Nose. Impressive athletic feats and riveting documentaries, but now eclipsed by the fresh Oscar winner Free Solo.

The film follows gifted free solo climber Alex Honnold as he sets out to fulfill a dream: to scale the 975-foot, near-vertical El Capitan completely unaided. Filmmakers Jimmy Chin and Elizabeth Chai Vasarhelyi accompany the often introverted athlete during his preparations, documenting significant setbacks and his struggle with self-doubt until the attempt, which offers the two and their team truly spectacular images. The last 30 minutes or so of the documentary are so thrilling and dizzying that viewers are literally pressed into the cinema seat.

But Free Solo doesn't just wow you with its visuals. Sure, the fact that Honnold climbs without ropes and other aids, and that really any wrong move would mean his certain death, gives the shots a special intensity once again. But apart from that, the images that can be seen here are not really new - especially since Durch die Wand was shown in our cinemas only a few months ago. But what makes the film additionally worth watching is the really interesting portrait of a man who literally goes his very own way and is confronted not only with the death of other people, but also with his own mortality.

In addition, the film also tries to clarify a question that probably every viewer will ask himself: What drives a person to do such a thing and thus also put his life on the line? Well, those who don't climb themselves will probably never be able to understand that. But Free Solo manages to offer a little insight into this very special world, which makes the motivation behind extreme climbing not comprehensible, but at least a little bit understandable. All in all, a really rousing film that more than deserves an absolutely worth seeing rating.