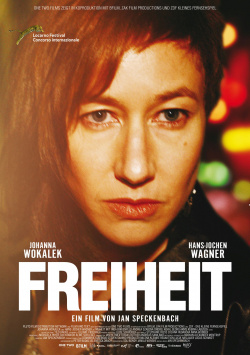 Impulsive Nora (Johanna Wokalek) makes a radical decision: without saying goodbye, she leaves her husband Philip (Hans-Jochen Wagner) and their two children together. Where to? She doesn't know. She only knows that she wants to feel alive again, to free herself from the shackles of everyday life. While Nora searches for her freedom, Philip must try to maintain something like normalcy for himself and his children - not knowing what has happened to his wife and whether she will ever return.

Freedom is an extremely difficult film. Difficult because it is very well and intensely acted by Johanna Wokalek, but also by the rest of the cast, but dramaturgically it is rather infuriating. Nora's motives remain unexplained for a long time. As a viewer, you only see her walking around seemingly aimlessly, not exactly behaving sympathetically towards other people, having sex with strangers or getting a new hairstyle. Then you are confronted with the consequences of her actions when Philip is shown desperately trying to be there for his children, do his job, and look for Nora.

After all this, you think what must have happened to make the woman take such a radical step. But the reason is frighteningly mundane. Instead of talking or being consistent and breaking up, Nora just walks away. And all because her everyday life has crushed her? Surely, almost everyone has that feeling sometimes. But either you have the courage to really change something or you grit your teeth and carry on as before. What's to stop Nora from telling Philip she's unhappy. What would be so hard about leaving him when it's no longer possible? No, we'd rather leave the children and suffer in the distance. Maybe there are people for whom that's the only solution... But in view of what the viewer gets to see from Nora's former life, her disappearance and especially her decision at the end of the film is absolutely incomprehensible.

If then still spasmodically tried to address in the story incidentally the refugee problem and in the society (more or less) subliminally existing racism, then one may well take the liberty as a viewer, this drama as little succeeded and arguably constructed to call. It doesn't help that Johanna Wokalek plays great. It doesn't help that there are some very atmospherically staged scenes that might at least make the feuilleton cheer. And even if it is always positive when a film stirs up and evokes strong emotions - as in this case anger and incomprehension - so there is for this very bulky staged drama on balance only one: Conditionally worth seeing!