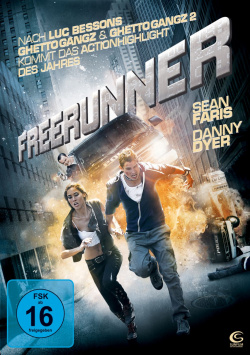 Movie: Ryan Carter (Sean Faris, The Fighters) is a gifted freerunner who regularly participates in illegal races, which are filmed with cameras installed all over the city and broadcast on the Internet, where viewers can bet on the respective participants. As a result, these races have become an extremely lucrative business. Ryan is getting closer to his goal of getting his girlfriend Chelsea (Rebecca Da Costa) and his grandfather (Seymour Cassel) out of the poverty and violence stricken neighborhood with every dollar he earns. This is incentive enough for him to always do his best. This is also noticed by the mysterious billionaire Mr. Frank (Danny Dyer), who kidnaps Ryan and his fellow racers during a race. Equipped with explosive collars that can be detonated at any time at the touch of a button, the young extreme athletes are to be forced to take part in a race to the death, the outcome of which is being bet on by a group of unscrupulous billionaires from around the world. The freerunners have 60 minutes to reach their goal. But Ryan refuses to play by Mr. Frank's rules.

Freerunner sounds like a tense action thriller, and here and there it lives up to that potential. But director Lawrence Silverstein relies too much on shaky handheld camera work and clichéd dialogue to turn his inherently interesting story into an exciting film. Especially the parkour sequences, which could give the film that special kick, were staged far below their potential. Whenever real parkour runners are seen, this very potential becomes clear. But when Silverstein then prefers to show the action in a completely blurry way through the eyes of the runners or has lead actor Sean Faris run in front of all too obvious green screen backgrounds, the whole thing unfortunately quickly loses its appeal.

Even the actors can do little to pull this out. Faris, who among other things was to be seen in some episodes of the series Vampire Diaries and had proved his athletic talent in the film The Fighters, acts extremely woodenly, whereas Danny Dyer, once a performer with high cult potential, gives the chief villain such an overdone smarmy that it is simply no fun to watch him. If he'd laid out the role a little more subtly and in a viciously cool way, he might have even managed to salvage much of the untapped entertainment potential.

No question, there are some well-filmed sequences and some very nice and even amusing moments. But the bottom line, unfortunately, is that it's not enough to mask the all-too-obvious weaknesses of this action thriller. Not a complete bust, it might even make for an enjoyable 90 minutes for diehard genre fans. But overall, rather a disappointing work that falls far short of its potential.

The purchase version of Freerunner has been cut in ten places by a total of just under 30 seconds. The rental house also has the uncut 18 version, which has rightly been given a higher age rating due to some rather gory effects (the making of which you can at least partially watch in the bonus material). The cuts are noticeable, but not so severe that they would significantly change the overall impression.

Picture + Sound: With the picture, it is first noticeable that the colors sometimes seem a bit pale. In addition, the extremely shaky camera work in many scenes makes a high degree of sharpness almost impossible. When the picture is steady, there is no smudging or major blurring to be seen. The sound has some decent surround effects to offer in the more action-packed moments, but the dialogue is mixed a bit too frontally. Decent, but still room for improvement in many aspects!

Extras: The DVD has some really worth seeing extras to offer. In addition to the trailer and some program tips from the provider, there is a nearly 29-minute making of, which offers a good insight into the production. There are also a few minutes of impressions from the film's parkour scenes and a nearly 20-minute extra about the stunts and effects. The only drawback to these featurettes worth watching are the lack of subtitles. Those unfamiliar with the English language will find little enjoyment in the behind-the-scenes look.

Conclusion: Freerunner would have had the potential to be a thrilling action flick with breathtaking parkour scenes. Unfortunately, these possibilities are almost completely wasted in favor of shaky visuals and flatly drawn characters. The film does have a few good moments to offer, but it's just not enough for a recommendable. The DVD also shows some weak points technically, only the (unfortunately not subtitled) bonus material can really be seen