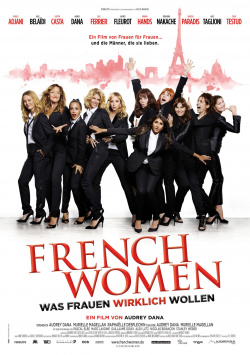 Fifteen years ago, Mel Gibson showed us What Women Want in the movies. Now director Audrey Dana invites us to Paris to see what women really want in several episodes. With a strong ensemble consisting of stars like Isabelle Adjani, Laetitia Casta or Vanessa Paradis, she tells stories from the lives of eleven women who have an affair with a married man, want to break out of their gruelling existence as a full-time housewife, are kept from finding the great love by a nervous stomach or have put their career before their private life until now, only to discover that a real girlfriend is simply something priceless. There are eleven very different women, who nevertheless have one thing in common: they are all searching, be it for their own personal happiness, for love or for friendship...

French Women - What Women Really Want has so many good basic premises that the film can actually only work. A wonderful ensemble, some very nice stories at the core, wonderful locations and a theme that never loses its relevance: the eternal battle of the sexes! There should be laughs aplenty here, a bit of French-infused Sex and the City flair and heartwarming romance. But alas, that is not the case. Instead, hysteria, lame gags, annoying characters and uninspired dialogue dominate the proceedings. Granted, there are some nice moments, in which the talent of the good actresses can unfold a bit. And in a few scenes the viewer can actually smile or even let out a slight laugh. But in the nearly two hours running time such moments are unfortunately absolutely scarce.

It is almost a mystery why Audrey Dana has not succeeded in directing a successful film with so many popular and talented actresses and obviously good ideas. She tries too hard to be funny and original. Beyond this effort, she forgets to draw her characters endearingly and tell their stories charmingly. Even if some ideas still work, the production as a whole seems too hectic, loud and exhausting to really entertain. Now, of course, you could argue that as a man, I'm not part of the target audience and simply don't know what women really want. But based on the reactions of my female colleagues present at the press screening, I can say with certainty: a film like this is not.

Towards the end, the entertainment value does pick up steam. But by then, unfortunately, it's too late. It may be that the capers of the eleven ladies from Paris are still amusing enough to justify a visit to the cinema for those viewers who like it a bit more over-the-top. But if you're hoping for a lively women's comedy with smart dialogues and charming characters, you'll be bitterly disappointed. For this there is unfortunately in the end only one: conditionally worth seeing!