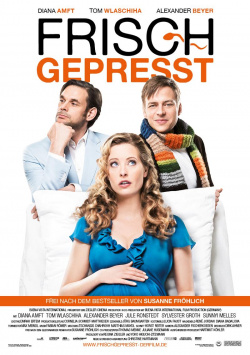 Andrea Schnidt (Diana Amft) is actually in her mid-thirties at the best age to start a family. But Andrea is a childless single by conviction. She can't do anything with children, so she doesn't even want to imagine what it would be like to have to deal with her own offspring. Especially since she already has enough problems with her indebted lingerie shop and her domineering, emotionally dismissive mother (Sunnyi Melles) to contend with day after day. But then Andrea reunites with her now-rich teenage crush Gregor (Alexander Beyer) and sets herself up on a date with the hulking macho man. However, this quickly proves to be an absolute disaster, which Andrea tries to cushion with the help of high-proof alcohol. Too bad she wakes up the next morning in Gregor's bed with a complete film tear. This misstep shakes Andrea awake. She wants to finally get her life together and save her beloved store at all costs. But then another man turns up in her life who throws all plans out of kilter: the likeable lawyer Chris (Tom Wlaschiha), the exact opposite of Gregor, might actually be the right man for a longer relationship. But before Andrea can come to terms with this terrifying thought, she is hit by the next shock: she is pregnant! But that's not all: not only Chris, but also Gregor is a possible father...

With Frisch gepresst Hanni & Nanni delivers an adaptation of the novel of the same name by Susanne Fröhlich, which seems to be tailored entirely to lead actress Diana Amft. It can't be a coincidence that not only the character of Andrea Schnidt, but also the question whether she rather chooses the sympathetic, but somehow boring Chris, or the macho Gregor, are very much reminiscent of her hit series Doctor's Diary. But unfortunately neither the dialogues, the humor or the charm of the film can reach the quality of the series (at least the first season).

The gags are sometimes extremely stale, the characters walking clichés and the dramaturgy far from any form of originality. Diana Amft manages to salvage some things with her charm. Somehow she manages to convey even the flattest of dialogues simply adorably. But against the weaknesses of the script and its despondent staging, even Amft's wonder weapon is only very partially effective. Characters like her mother, who we have just seen in a very similar form in Kein Sex ist auch keine Lösung, or Andrea's loyal but constantly nagging co-worker Helgo (Sylvester Groth) are simply too ordinary, too hackneyed to be amusing in any way.

Guest appearances of celebrities such as Axel Schulz or the small appearance of Oliver Pocher also seem to be too much effort, are not fluently incorporated into the story and thus seem to simply serve the purpose of being able to accommodate as many familiar names as possible in the opening credits and chase them across the red carpet.

Director Christine Hartmann has so far worked primarily for television. And that is clearly evident in Freshly Pressed. The comedy has all the ingredients from which shallow but entertaining Sunday evening entertainment is made. There the whole thing might work quite well and find its audience. But the movie has no business being in the cinema. Except for the leading actress (and maybe some of her colleagues) the bestseller adaptation has hardly anything to offer that would justify going to the cinema and buying a not exactly cheap ticket. Sure, there's an audience for movies like this. An audience that doesn't mind the lack of originality and can be amused by the not exactly innovative and profound jokes. That's perfectly fine, too, and even lends some justification to the making of a film like this. But Freshly Pressed does not need to be seen on the big screen in any case. Therefore, if you were hoping for The German cinema comedy of summer 2012, you will be bitterly disappointed. As TV entertainment okay, as a feature film even with all love only for very stubborn Diana Amft fans only conditionally worth seeing!