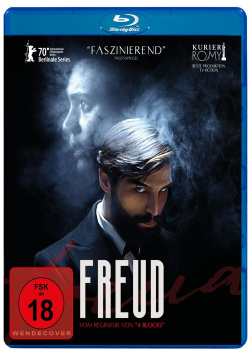 Content: Vienna in 1886: The young doctor Sigmund Freud (Robert Finster) must fear for his reputation when his theories on hypnosis meet with complete rejection from the Viennese medical profession. The knowledge he has acquired in this field, however, may soon come in handy. For when a gruesome series of murders shakes the upscale society, Freud is drawn into the investigation together with the police inspector Kiss (Georg Friedrich), who has been battered by a war trauma, and the young medium Fleur Salomé(Ella Rumpf). In the process, they uncover a conspiracy that reaches into the highest social and political circles. As their powerful backers do everything they can to avoid being exposed, the investigation turns into a veritable nightmare for Freud, Kiss and Fleur Salomé....

With "Freud", director Marvin Kren, best known for the acclaimed series "4 Blocks", has staged a gripping blend of historical fact and fiction that enriches classic mystery elements with fantastical elements. The result is an atmospheric thriller with some very unusual moments. As much as the story and its resolution is rather conventional at its core, the execution is not. With an ingenious mix of lighting, editing and sound effects, Kren repeatedly creates surreal nightmare moments that are disturbing and fascinating at the same time. Coupled with an atmospheric set and gloomy scenery, this creates a darkly engaging underlying atmosphere that is sustained until the end.

There are a few longueurs over the course of the eight episodes, but this is due to the production style, which can seem a little unwieldy at times. But it is exactly this style, which also makes the special charm of the mini-series. One is happy to put up with the small lengths, because the journey on which Kren and his scriptwriter Benjamin Hessler take the audience is perhaps so exciting precisely because their style repeatedly defies the usual narrative patterns. Yes, "Freud" is not light fare. The series is dark, dirty, brutal, disturbing, unpleasant - but also fascinating, exciting and really good!

You can have fun and count how often someone smiles in the course of the series. One hand should be enough for that, since everyone involved usually scowls extremely. That's difficult and doesn't necessarily give pleasure. But that's not what the series wants. It wants to tell an exciting, cleverly constructed story in a historical setting - and it succeeds very well. Supported by a convincing ensemble, "Freud" is a must for anyone who likes challenging, sophisticated mystery entertainment. For this, there is clearly a deserved: worth seeing!

Picture + Sound: The image of the Blu-ray convinces with a very high overall sharpness, which makes even in dark scenes small details recognizable. In close-ups of faces, one could almost speak of a pore-deep pure image sharpness. Coloration is very consistent, perfectly capturing the atmosphere of the series visually. The audio is in a powerful DTS-HD Master Audio 5.1 mix. Dialogue sounds clear and crisp from the speakers (though the dialect is so strong from some of the actors that subtitles are definitely helpful). The music and some purposefully used sound effects also provide comforting goosebumps. Very good!

Extras: Bonus material includes a very interesting audio commentary on the first episode, in which director Marvin Kren and screenwriter Benjamin Hessler are interviewed by film scholar Prof. Dr. Marcus Stiglegger about the making of the series and the background. A really exciting conversation, which is from the information content above the level of usual audio commentaries. As a nice addition to the Blu-ray is still a booklet with an extensive interview with Marvin Kren. Good!

Conclusion: "Freud" is an exciting and atmospherically dense thriller series that skillfully enriches biographical facts about Freud and the time with fictional elements. Despite minor lengths grippingly staged and extremely atmospheric filmed - for friends of sophisticated mystery thrillers a real must! The Blu-ray presents the 8-part mini-series in very good picture and sound quality. The extras are clear, but extremely interesting and informative. Absolutely recommendable!