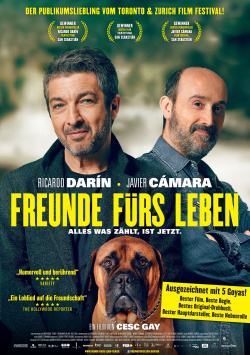 Ever since successful computer scientist Tom&aacute;s (Javier C&aacute;mara) moved to Canada, he and his best friend Juli&aacute;n (Ricardo Dar&iacute;n) haven't seen each other. But when Tom&aacute;s learns that Juli&aacute;n is gravely ill and will soon die, he immediately heads to Madrid to see his friend one last time. Secretly, he hopes that he can persuade the eccentric actor to continue his treatment and thus live a little longer. But Juli&aacute;n has long since made peace with himself and his life. He doesn't want to spend the time he has left in hospitals, pumped full of drugs that strip him of every ounce of dignity and personality. And so the friends spend a few pleasant days enjoying life and all that has bound them together over so many years - until they have to say goodbye to each other forever.

In Spain, the humorous drama Friends for Life advanced to become an absolute critics' and audiences' favourite. The work was awarded 5 Goyas - the Spanish Oscar. The film also won the hearts of the audience at various festivals. This may be due to the very restrained staging, which ensures that the friendship between the two men very authentic and the handling of the imminent death of Juli&aacute;n very honest. Unnecessary pathos is avoided as well as overly maudlin moments. On the one hand, this is very pleasant, but on the other hand, it also leads to a small problem.

Because over the running time of just under two hours, minor lengths arise again and again, which are clearly emphasized by the carried narrative pace and the unexciting staging. Somehow, the film maneuvers itself into a quandary. On the one hand, all scenes are really important to show the viewer the specialness and intensity of a friendship, which is still a friendship for life even after years of physical separation and a certain estrangement due to completely different life plans. On the other hand, one has the feeling that a certain compression would have done the sometimes too sluggish narrative flow some good.

Besides that, Friends for Life is a really beautiful film that, precisely because it is so pleasantly unsentimental, has an extreme emotional impact on the viewer in two scenes. The first scene is a small moment between Juli&aacute;n and his son that brings tears to your eyes completely unexpectedly. The second scene is the ending, which could not have been executed better. At this point at the latest, any criticisms that could rightly be made become insignificant. And even though this is actually a very sad story, you won't leave the cinema affected, but happy and with a slight smile on your face. And exactly for it there is then under the line also a quite clear: Worth seeing!

Cinema trailer for the movie "Friends for Life (Spanien 2015)"
Loading the player ...