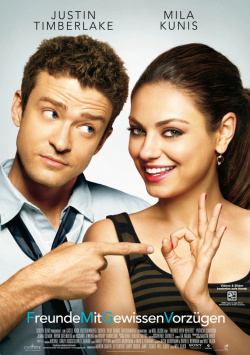 The days when Justin Timberlake was only successful as a musician are long gone. At least since his convincing performance in The Social Network, he has also convinced the critics as an actor. So it's high time Timberlake took on a real leading role for once. After his wonderfully self-deprecating performance in Bad Teacher, it's once again a comedy that should finally establish the former N*Sync member as an attractive movie star. And the result is really something to behold.

In the romantic comedy, Timberlake plays Dylan, a young art director who is invited to New York by headhunter Jamie (Mila Kunis) to audition for a lucrative job at a prestigious magazine. Actually, Dylan doesn't really want to leave his job in San Francisco, but Jamie's unbeatable way of teaching him the benefits of New York convince him otherwise. No sooner have they moved to the Big Apple than a real friendship begins to develop between Dylan and Jamie. Since the two don't want a real relationship, but don't want to give up sex, they decide to extend their friendship to bedtime games together. But as Billy Crystal noted in Harry and Sally: Men and women can't be friends. Sex always gets in the way. I wonder if the same is true for Dylan and Jamie.

At first glance, Friends With Certain Benefits may seem merely like a slightly altered version of the recent Ashton Kutcher/Natalie Portman comedy Friendship Plus. But director Will Gluck, who most recently proved he can elevate more shallow genres with intelligent wit, charm and wit with the cheeky teen comedy Simply to Have, is able to repeat that feat with his latest effort. Certainly, when at the beginning the typical romantic comedies are attacked with several amusing side blows and the film at the end, however, exactly the rules and clichés of the genre, it seems a little mendacious. But Gluck's production is so likeable and entertaining that this shortcoming can just be forgiven.

Justin Timberlake, who has repeatedly proven his comedic talent in several guest appearances on the American comedy show Saturday Night Live, is once again convincing with a penchant for self-irony and a lot of charm. His film partner Mila Kunis, who already proved in Black Swan that attractiveness and talent are not necessarily mutually exclusive, also possesses this. Sure, her performance in Friends with Benefits is less powerful, but no less charismatic. When Timberlake and Kunis dig through the sheets in a thoroughly humorous but also very sexy way, the sparks fly, which is good for the film's bottom line.

Not to be left unmentioned are the supporting actors, whom Gluck has chosen perfectly. Patricia Clarkson is a delight as Jamie's hormone-driven mother, and Woody Harrelson has some really good laughs on his side as Dylan's gay comedian. And finally, Richard Jenkins provides some of the film's more emotional moments as Dylan's dementia-stricken father. Here, it's very pleasing that the mix of comedy and drama doesn't feel out of place or contrived. The fact that Gluck finds just the right tone, especially in the scenes between Dylan and his father, is one of the truly positive aspects of the comedy.

Friends with Certain Benefits is certainly not great, highbrow cinema. But Will Gluck has succeeded in creating an extremely entertaining comedy that doesn't take itself too seriously and scores points with two likeable leads and plenty of sparkling romance. And so it is fair to say that one of the certain merits of these friends is that their love triangle, despite some minor hang-ups, turned out absolutely worth watching!

Cinema trailer for the movie "Friends with certain benefits (USA 2011)"
Loading the player ...