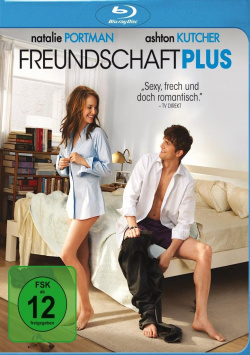 Movie: With films like Ghostbusters, Meatballs and I Think I'm Being Snogged by a Moose, Ivan Reitman made comedy history, especially in the early '80s. In recent years he has been increasingly active as a producer, including Up in the Air by his Jason Reitman. With the romantic comedy Friendship Plus, he now wants to prove that he is far from being old hat in the director's chair.

For the first time, Adam (Ashton Kutcher) tries to win the heart of Emma (Natalie Portman) at 14, but the girl bitterly turns him down. Years later, the two meet again by chance and end up in bed together. Emma in particular, who likes to claim she has a peanut allergy to relationships, enjoys the sex and hopes for a purely sexual friendship from Adam. Adam, who just lost his ex-girlfriend to his father (Kevin Kline), a former TV star, likes this arrangement just fine. Sex with no strings attached - it doesn't really get any better than that. It's just too bad that real feelings quietly creep into bed with them, which seems to doom the Friendship Plus.

Although Reitman's latest directorial effort is primarily about the number one issue, Friendship Plus thankfully doesn't degenerate into a cheap sex romp. At its core, the film has become a nice romantic comedy with a few raunchy moments, though these have little negative impact due to the good chemistry that can be felt between the two leads. Natalie Portman and Ashton Kutcher make for a charming couple worth watching, and they confidently make their way through the not-so-original show. And supporting actors like the great Kevin Kline and Lake Bell also provide some enjoyable moments.

So Friendship Plus could actually be a real winner for genre fans. But the film suffers from two factors that have an extremely negative impact on the otherwise positive overall impression. Firstly, there is the running time, which at almost two hours is far too long. The story, which could have easily been told in 90 minutes, was artificially inflated, causing completely unnecessary lengths, especially in the last act. The bigger problem, however, is that Reitman is too uptight in trying to appeal to multiple audiences at once, which results in him letting everyone down. On the one hand, Friendship Plus is supposed to be a kind of modern Harry and Sally and appeal to such an audience. On the other hand, it also wants to satisfy younger viewers who like it a bit coarser, simpler and raunchier. But the scenes that are then aimed at this audience seem strangely out of place and at the same time also dilute the better moments, which can score with inherently clever dialogue wit and amusing ideas.

So, on balance, this romantic comedy is unsurprisingly nice entertainment with good actors that could have been much better if only the director, who is adept in his own right, could have decided on a target audience. Therefore: unfortunately only worth seeing with cutbacks!

Picture + Sound: The technical implementation of the Blu-Ray is on a good level for the genre of romantic comedy. The picture is clean and has good detail sharpness and vibrant colors. The sound is dominated by the frontally mixed dialogues and the film music, one looks for large surround effects rather in vain. Good.

Extras: Let's get started with an informative audio commentary by director Ivan Reitman, with optional German subtitles. Reitman gives an entertaining insight into the making of the film and his views on comedy. A standard promotional making of, as well as two other short documentaries, some quite nice cut scenes and two alternate scenes are also on the program. The whole thing entertains quite well, but the promotional nature is very apparent in the extras. Nice, but no more.

Conclusion: Friendship Plus is a nice comedy, but its potential is weakened by too many unnecessary sideshows. Still, there are enough well-done moments to make this film still well worth watching, all things considered. Technically, the Blu-ray has been well executed, the extras are a bit perfunctory, but good. This results in the end just a: recommendable!