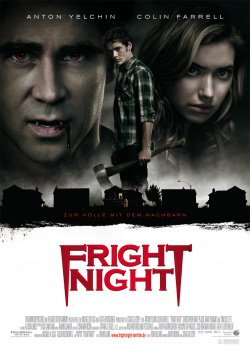 With the ongoing vampire boom, it was really only a matter of time before the little 80s cult gem Fright Night was revived as well. Directed by Craig Gillespie (Lars and the Women), a new version has emerged that, despite typical remake weaknesses, is surprisingly well done and bows lovingly to the original, while amusingly taking aim at contemporary Twilight vampires along the way.

Everything is actually going great for Charlie Brewster (Anton Yelchin). The former nerd has improved his social status at school through his relationship with the popular Amy (Imogen Poots), which only affects his friendship with his former best buddy Ed (Christopher Mintz-Plasse). When Ed claims that Charlie's new neighbor Jerry (Colin Farell) is a vampire, Charlie doesn't believe him. But when Ed disappears without a trace, Charlie begins to have doubts - doubts that are soon confirmed. For Jerry is indeed a bloodsucker, who now not only the curious boy, but also his mother (Toni Colette) and Amy after the lives. With the help of popular show magician Peter Vincent (David Tennant), a self-proclaimed vampire expert, Charlie wants to put an end to Jerry. But this plan proves to be more difficult and dangerous than anticipated.

While Gillespie's version of Tom Holland's cult film sticks closely to the original in its basic framework, even adopting some shots almost one-for-one. And yet, the remake has been given its own unique touch, which is very much in keeping with the entertainment value. For example, unlike the original, 2011's Charlie Brewster is still a doubter at the beginning, while 1985's Charlie, embodied by Chris Sarandon and a die-hard horror fan, senses right from the start that something is wrong with his new neighbor. The character of Ed has also been changed accordingly, with Christopher Mintz-Plasse (Superbad, Kick-Ass) proving to be perfect casting for the would-be vampire hunter. The most striking change, however, concerns the character of Peter Vincent. Whereas in the original he was an aging horror movie star and host of the TV show Fright Night, here he's a completely wacky, self-absorbed magician who doesn't really have much sympathy or respect for his fellow man beyond the stage. By making this Peter Vincent, grandly portrayed by former Doctor Who David Tennant, seem so fundamentally different from the original Peter Vincent Roddy McDowall, who is particularly appreciated by fans, it cleverly avoids any comparison between the two actors and their characters. And that, at least from the point of view of a fan of the original, is the best solution the makers could have come up with.

Now to Colin Farrell, who has made the vampire Jerry a little less charming, but more thuggish and no less menacing than his predecessor Chris Sarandon. Whether it's his nice sideswipe at Twilight vampire Edward and his way of picking up apples, or his hunt for Charlie, Farrell is always having palpable fun, giving his character a certain coolness that makes Jerry a compelling movie vampire. Even if the look of the vampires can seem a bit trashy at times, it's nice to see that the original design was obviously used here. And those familiar with the original will also be pleased to see a very amusing guest appearance by one of the main characters from the '85 film.

The mixture of old and new makes the remake of Fright Night a very entertaining horror fun, which can score with nice effects, a lot of humor and even some suspense. The 3D effect hardly comes into play, but when it does, it works really well. Especially during the bloody confrontation between Jerry, Charlie and Peter in the latter's gloomy luxury apartment there are some nice 3D moments that even increase the fun factor of the film a bit. And so, whether you're familiar with the original or not, Fright Night should provide top-notch entertainment for any genre fan who likes a mix of blood, humor, suspense, and self-deprecation. Absolutely recommended!