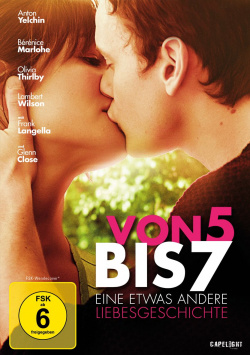 Content: The young writer Brian (Anton Yelchin) is desperately waiting to finally publish one of his stories. But only cancellations hail and Brian falls into a deep creative crisis. But then one day he meets the attractive Frenchwoman Arielle (Bérénice Marlohe). Between the two there is a huge radio communication, but there is a problem: Arielle is not only nine years older than Brian, she is also a married mother of two children. Nevertheless, she would like to meet Brian regularly, always from five to seven o'clock - with the consent of her husband (Lambert Wilson). As much as he feels attracted to Arielle, such a relationship would go against Brian's morals. But he cannot resist the temptation for long. Thus a passionate affair begins between the two, which only then threatens to become complicated when affection and passion become the great love…

"From 5 to 7" is a small but fine romance. The pace of the narrative is slow and the poetic undertone, which is to be achieved by including bank inscriptions in New York's Central Park, can seem somewhat stressful to some viewers, especially at the beginning. This is especially true for the German dubbing, which is okay, but can't capture the romantic warmth of the original sound. You shouldn't expect a romantic comedy like Katherine Heigl, Jennifer Aniston and Co. do. Rather, filmmaker Victor Levin has staged a very classic love story, which may have humorous moments, but is first and foremost more of a drama than a comedy. Levin's film is a homage to very big feelings, which he builds up rather cautiously, but nevertheless intensively.

The movie has many wonderful scenes. The fact that there are some lengths in between is forgotten by the finale at the latest, where a short moment is enough to drive hopeless romantics' tears into their eyes. Just wonderful. The film lives from these little moments, which are immersed in enchanting pictures of New York and are credibly realized by the charming actors. Anton Yelchin, who recently died much too early in an accident, is an absolutely convincing writer in the crisis of meaning and life. That Brian throws his moral ideas for Arielle overboard after initial hesitation and quickly loses his heart to them, Yelchin plays with a pleasant naturalness. But the beguiling Bérénice Marlohe ("Spectre") also makes it easy for him to convey these feelings credibly.

What the film also succeeds in doing well, besides this romance, is to incorporate the budding friendship between Brian and Jane (Olivia Thirlby), the lover of Arielles husband, into the story in such a way that it doesn't seem constructed, but develops naturally within the events. The fact that Levin didn't make Jane a character in a triangle and that she really only takes on the role of a good friend is also one of the well done aspects of this movie.

Sure, "From 5 to 7" is not a perfect movie. But it is a very beautiful, sensitively told work with some effective goose bumps, charming actors and an atmospheric visual language. If you like light romantic dramas and can overlook some small lengths, you shouldn't miss this nice home cinema premiere. But be careful: Those who are built close to the water need at least a handkerchief at the last minute! Worth seeing!

Picture + Sound: The DVD's image is particularly appealing with its warm, sweet colors. The image sharpness is at a good level, whereby there is still some room for improvement, especially in the dark scenes. The sound is rather unspectacular, which isn't unusual for a movie of this genre. The dialogues and the soundtrack are the focus of the tonal events, but at least there are some minor ambient noises that make sure that there is also some life to be felt in the surround channels. Good.

Extras: As a bonus there is a promo clip offering a look behind the scenes (approx. 4:09 min.), as well as a short making of (approx. 9:10 min.) with interviews and footage from the shooting. The trailer completes the not exactly extensive bonus offer then again.

Fazit: "From 5 to 7" is a beautiful romance that can convince with charismatic actors, atmospheric images and a pinch of poetry. An unusual love story that lovers of small US productions beyond the mainstream should not miss. The DVD offers good picture and sound quality. The bonus material is rather poor, but qualitatively okay. Altogether there is a clear one for it: Recommendable!