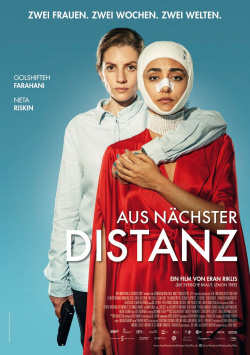 Israeli Mossad agent Naomi (Neta Riskin) is given a very special assignment: she is to protect Lebanese informant Mona (Golshifteh Farahani) in a safehouse in Hamburg, Germany, while she recovers from facial surgery before being shipped abroad with a new identity. The apartment where the two women will live together for two weeks is supposedly safe. Yet Naomi has a bad feeling from the first moment, seeing a possible assassin in every passerby, neighbor, or newspaper vendor, and thinking with every ring of the phone that her cover has been blown. A difficult, nerve-wracking time begins, one that will end up being about much more for both women than first thought.

The story of At Close Range does not sound uninteresting, but the chamber-play-like realization unfortunately is not. Director Eran Riklis (The Syrian Bride, Lemon Tree) does try to build gripping tension by establishing an atmosphere dominated by fear and paranoia. However, he fails to allow the two characters, who are very strong at their core, to adequately develop within it. The conversations between the women seem very wooden and are robbed of any possible power by some overused clichés. Thus, no believable bond can develop between the two women, which then makes the final act unconvincing.

Even at moments when there should be breathtaking tension, Riklis holds back the pace so much that the story never really carries you along. It almost seems as if the director wanted to prevent with all his might that his thriller chamber play degenerates into something like entertainment cinema. He succeeded very well - but it didn't do the movie any good. On the contrary. Instead of a gripping and also meaningful story, From the Closest Distance has become a very long-winded work, which is not only dramaturgically, but also visually completely out of place in cinema.

It's a shame that an accomplished filmmaker like Riklis, who has proven in the past that he can make great cinema out of small stories, lets the potential of such a story go unrealized and delivers such an indecisive-looking little film that fits more into the series Das kleine Fernsehspiel than into cinema. Sure, the drama has some good moments. But they aren't enough to leave a predominantly positive overall impression. And so in the end there is also only one: Only conditionally worth seeing!

Cinema trailer for the movie "At Close Range (Deutschland/Frankreich 2017)"
Loading the player ...