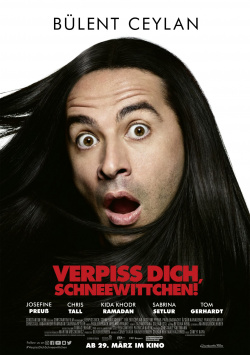 Sammy (Bülent Ceylan) actually has everything: talent, motivation and beautiful hair - and yet it just doesn't want to work out with the career as a musician. But now he's had enough of performing as a schlager hansel in a retirement home. By applying to a casting show, he wants to finally take off as a rocker. Too bad that the makers of the show are not looking for a solo artist, but a band. Sammy only has a few days to recruit more musicians for his band - and he's supposed to be taking care of his brother's (Kida Khodr Ramadan) hamam. Against all odds, he manages to get a more or less talented band together with his sister Jessi (Josefine Preuß), the temporary masseur Wolle (Paul Faßnacht) and his buddy Mahmut (Özgür Karadeniz). But now the problems really start.

As the saying goes: cobbler, stick to your last. Somehow even the most successful German comedians never quite manage to convince in movies. Mario Barth thrills an audience of millions on his tours and on television, but his cinema comedy was a disaster, at least artistically. Kaya Yanar celebrates great success on TV and on stage, but no one wanted to see his Ranjid in the cinema. And Rene Marik was able to co-finance his cinema outing with the help of fans through crowdfunding, but the result was still not a box office hit - and that despite the fact that his Mole was still an absolute cult at the time.

So now Bülent Ceylan, undoubtedly one of Germany's most likeable comedians, is also trying to transfer his success as a stand-up comedian to the cinema. And as much as I like Ceylan, as funny as I find many of his live acts, I can hardly say anything good about this comedy. Fuck off, Snow White is a disaster both dramaturgically and acting-wise. Not only are most of the gags simply not funny, the few that might work in their own right are delivered in such a flat fashion that the laughter that had just risen is immediately stifled.

It's not that only the acting of unskilled actors like Bülent Ceylan or Sabrina Setlur is clearly flawed. Even otherwise really reliable actors like Josefine Preuß only deliver completely over-the-top performances here that lack any talent whatsoever. But that is by far not the most serious point of criticism. It gets really annoying when there is an attempt to give the story something like depth or relevance when xenophobia is addressed. In itself, yes, a laudable attempt, but the implementation is served with such a sledgehammer that as a viewer you can only shake your head in despair.

There is, for example, the competing band with the name Frei.Staat - no, how subtle - which is conspicuous by its extremely right-wing appearance. Of course the stupid audience doesn't notice that and cheers the guys like crazy. Only when the singer insults a dark-skinned employee of the show in front of running cameras, even the last idiot realizes that Nazis were cheered here. Oh my god! It really doesn't get any plainer or more cliched than that.

There are moments that suggest that director Cüneyt Kaya approached the project with the right intentions. But when it comes to the realization, unfortunately, it hangs at all corners and ends. And so Verpiss Dich, Schneewittchen has to be seen as another failed attempt to turn a comedian into a movie star. Maybe it would be worthwhile to have a look at Great Britain or the USA, where exactly this succeeds again and again. Or simply leave it alone and concentrate on the next stage programme. Because that's where Bülent Ceylan is in much better hands.

Cinema trailer for the movie "Fuck off, Snow White (Deutschland 2017)"
Loading the player ...