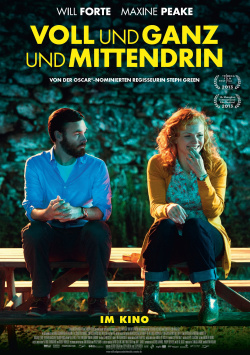 Full and Complete and In the Middle

Just a few months ago, Vanetia Casey (Maxine Peake) was living a fairly carefree life in County Kerry, Ireland, with her husband Conor (Edward MacLiam) and their two children, Lenny (Brendan Morris) and Noni (Ciara Gallagher). But that changes when Conor suffers a stroke and falls into a coma. When he awakens from it, some regions of his brain are so damaged that the man has taken on the personality of a petulant child. But having fully recovered physically, Conor is released from rehab and must now rejoin his family. Accompanying him is closeted American scientist Ted Fielding (Will Forte), who plans to observe and document this rare medical case for two months. While Ted keeps himself completely in the background during the first few days, shying away from any personal connection with the Caseys, he slowly breaks down that wall towards Vanetia in particular. And he finds that this new situation not only changes the family he's watching, but that something in him is changing as well.

Full and Whole and In the Middle is a quiet, very emotional drama that marks Oscar-nominated director Steph Green's accomplished feature-length debut. With a great ensemble of actors, Green has sensitively executed Ailbhe Keogan's screenplay, which is based on personal experiences. She manages to walk the tightrope between drama, humor and romance very convincingly. Shot on the east and west coasts of Ireland, the film thrives on a very special charm that spreads over the viewer like a warm blanket until the beautiful finale.

The German-Irish co-production is carried primarily by lead actress Maxine Peake and a pleasantly cast Will Forte against his image. Forte, a member of American sketch comedy show Saturday Night Live until 2012, has been seen primarily in rather silly roles in films such as The Chaos Dad and the MacGyver spoof MacGruber. Here, Forte takes a step back and reveals a very sensitive and profound acting, which one would not have expected from him. But also the other actors, such as a great Edward MacLiam or the two very likeable young mimes Brendan Morris and the little Ciara Gallagher, make Voll und Ganz und Mittendrin a real acting pleasure. The beautiful images of the Irish small-town idyll further intensify this impression.

Now this may sound like a perfect film for lovers of small arthouse tragicomedies. However, Steph Green's feature debut is not. There are some scenes that are staged a bit too worn and thus slow down the already leisurely pace of the film even more. As a result, the realization of the story also gets in places of something that ripples along arbitrarily without offering any real climaxes. If you can get into it, then this is simply beautiful, charming feel-good cinema with some very emotional moments. If you don't manage to get carried away by the gently flowing pace, you might find the whole thing boring and inconsequential. And this beautiful film truly does not deserve that.

So if you think that even in cinema sometimes there is power in the quiet and it does not always have to be told the very big, spectacular stories, then you will definitely be charmed by Voll und Ganz und Mittendrin. A small, nice and despite a certain sadness also simply beautiful film, which has more than earned a worth seeing!

Cinema trailer for the movie "Full and Complete and In the Middle (Deutschland/Irland 2013)"
Loading the player ...