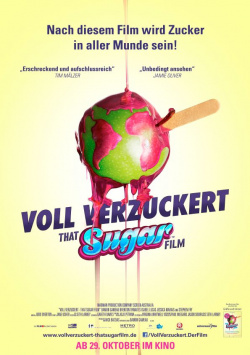 Sugar sweetens our lives! Sugar gives us energy and makes us happy. Yes, sugar is a fine thing! That may be true in principle. But unfortunately, sugar, the most widely consumed food in the world, is also highly unhealthy in the quantities we consume it. It promotes disease and is addictive. So we should significantly reduce our sugar consumption. Easier said than done. Because we have no idea where sugar is to be found. And as consumers, we don't really know how much sugar is actually unhealthy. The Australian Damon Gameau now wants to do some educational work. He has embarked on an extremely sweet journey to find out what influence sugar has on the human organism and where we ingest sugar every day that we could actually avoid.

The result of this journey is the documentary Voll Verzuckert, which seems like the sugar version of Morgan Spurlock's Super Size Me. Like Spurlock in his day, Gameau, who otherwise eats a fairly healthy diet, embarks on a very one-sided diet, accompanied by specialists and doctors. Only that in his case it is not fast food, but particularly sugary foods and drinks. Also, the often humorous presentation of inherently shocking facts is strongly reminiscent of Super Size Me. Both documentaries also have in common the rather lurid and one-sided presentation of the subject matter. However, none of this detracts from the overall positive impression and the fact that the film, in its somewhat flippant way, provides some thoroughly important insights from which every viewer can and should learn something.

The sometimes genuinely funny and imaginative presentation of what sugar does to our bodies really does make the subject matter easy for all viewers to understand. This is important in order to really internalize the message of the documentary. There are some very well done visual elements, some interviews that are almost unbelievable in their absurdity, and a scene that makes a normal visit to the dentist seem like paradise on earth. Gameau does a very good job of getting his point across in an easily accessible and thus understandable way. But unfortunately, he makes the mistake that people like to chalk up to his colleagues like Morgan Spurlock or Michael Moore: he too often puts himself too much in the center of the action. There are just too many scenes in which he flirts with his ever-growing belly girth or in which he wants to appear smarter and funnier than his counterpart. Since he himself is the subject of the film, it's inevitable that he also takes a central role. But there are many scenes in which he could have pulled his punches - and that would certainly have served the film and its credibility well.

Nonetheless, Voll Verzuckert is an entertaining, interesting, shocking, surprising, and insightful film that will make its viewers reconsider their own diets, at least momentarily. Anyone looking for a reason to reduce their own snacking or consumption of soda, coke and the like should definitely not miss this film. Worth seeing