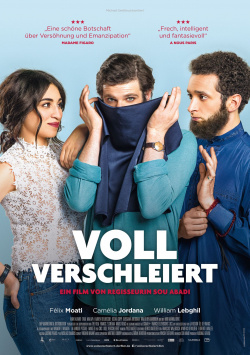 Students Armand (F&eacute;lix Moati) and Leila (Cam&eacute;lia Jordana) are happily in love and have big plans for their future together: in New York, they want to intern at the United Nations. But then Leila's brother Mahmoud (William Lebghill) reappears after an extended stay in Yemen and thwarts the couple's plans. For the once warm-hearted young man has suddenly become a religious hardliner, seemingly brainwashed by Islamism. He forbids his sister any contact with Armand - not to mention the internship in New York. But Armand doesn't want to give up his Leila so easily. He desperately needs to see her again and free her from the clutches of her fanatical brother. But the only way to get close to her is to put on a niqab and pretend to be Scheherazade. The plan initially works - until Mahmoud begins to show interest in his sister's new friend.

Religious fanaticism, Islamism or full-face veiling by wearing a niqab - for many signs of a religiously motivated oppression of women - all these are not necessarily topics with great comedic potential. Rather, they are socially irritating topics that hardly motivate laughter. But filmmaker Sou Abadi shows in Fully Veiled that these topics can also be approached in a very humorous way without dragging them into ridicule. She manages to treat religions with respect, while at the same time taking a good swipe at their arbitrary interpretation by fanatics.

Although there are some thoroughly dramatic moments and the backstory is rather serious in nature, Abadi's production has a lightness of touch that is just plain fun. Sure, in many scenes the film is nothing more than a modern variation of comedy classics like Some Like It Hot or Charlie's Aunt. But especially because of the humorous handling of difficult, but red-hot topics, the film is more than just a flat comedy of mistaken identity. Even in sillier scenes, the situations and dialogues have an underlying quality that makes you not only laugh, but also think.

Admittedly, that sounds like more profundity now than the film can ultimately boast. Because despite its relevance, Fully Veiled is first and foremost light-hearted fun that wants to offer its viewers a break from the worries that are also omnipresent due to the problems dealt with here. And as such, the film works really well. For lovers of light French comedy fare, this turbulent plea for tolerance, love and equality is then: absolutely worth seeing!