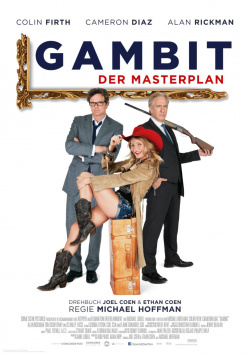 Harry Dean (Colin Firth) is an unassuming art curator who carries out his work with sober correctness and leads his life in unexciting routine. But deep beneath his cultured façade, things are bubbling furiously. Harry is tired of the insults and humiliations he has to endure from his arrogant boss Lionel Shahbandar (Alan Rickman) day after day. And while he keeps his composure on the outside, he's secretly planning a big score to get back at the obsessive art collector. His old friend and ally Major Wingate (Tom Courtenay) has created a near-perfect forgery of a painting Shahbandar has been after for years, which is now to be foisted on the billionaire for a real fortune. Harry plans to use Texan PJ Puznowski (Cameron Diaz) as a decoy. The painting in question is said to have been discovered by chance at the rodeo rider's grandmother's house. The plan seems perfect, especially since Shahbandar actually succumbs to PJ's charms and shows great interest in her and the painting. But there's one thing Harry hasn't counted on: that the feisty Texan will also make his heart beat much faster.

Gambit - The Master Plan is loosely based on the 1966 crime comedy The Girl from the Cherry Bar, starring Michael Caine and Shirley MacLaine. The Coen brothers, Joel and Ethan, used the Oscar-nominated comedy as the model for their turbulent screenplay, which Michael Hoffman (A Russian Summer) executed with a light hand. The film never tries to be anything more than a light comedy and isn't ashamed of its uninhibitedly silly moments, which are only used a bit excessively towards the finale. Admittedly, one is used to much cleverer things from the Coens. Still, it's their amusing script that makes the film so enjoyable with its wordplay and slapstick interludes.

Although not every gag is spot on and some scenes are staged a bit clumsily in terms of comedy, on balance the whole thing works pleasingly well. This is also due to the near-perfect cast, who play through the turbulent goings-on in good humour. Colin Firth is often accused of having very limited facial expressions, if not only one. But that's exactly what fits perfectly here. Firth is simply wonderful as the extremely stiff Brit who can't do anything at all with PJ's uninhibitedly open manner at first. When Firth reacts to the Texan's apparent naivety with the so often criticized facial expressions or Harry's always correct choice of words in combination with PJ's demeanor leads to a very ambiguous dialogue in a hotel lobby, it becomes clear that the Oscar winner can fully play to all his strengths in a role like this - much to the pleasure of the audience.

But also a delightfully smarmy Alan Rickman, Stanley Tucci portraying German art expert Martin Zaidenweber as a completely over-the-top cliché, and also Cameron Diaz as a somewhat loud but still charming cowgirl make Gambit - The Master Plan really fun to watch. Admittedly, the intellect is not particularly challenged here and for some gags they obviously dug a little too deep into the mothballs. But apart from a few little hangs, Michael Hoffman, with the help of the Coen brothers and his good cast, has succeeded in making an easy-going, turbulent comedy that makes it easy for the viewer to just switch off and enjoy himself in a simple, but also charming way. If you don't expect more, you'll get about 100 minutes of entertaining entertainment, for which then also deservedly applies: Worth seeing!